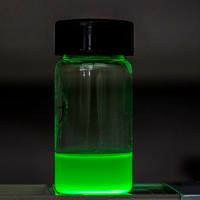 (November 18, 2015)  A team of Florida State University materials researchers has developed a new type of light-emitting diode, or LED, using an organic-inorganic hybrid that could lead to cheaper, brighter and mass produced lights and displays in the future.

Assistant Professor of Physics Hanwei Gao and Associate Professor of Chemical Engineering Biwu Ma are using a class of materials called organometal halide perovskites to build a highly functioning LED. They lay out their findings in the journal Advanced Materials.

“Early work suggested perovskites could be a promising material to build LEDs,” Gao said. “But, the performance was not up to their potential. We believed there was significant room for improvement.”

Perovskites are any materials with the same type of crystal structure as calcium titanium oxide. Other researchers experimented with perovskites to build LEDs in the past but could not build particularly effective ones. Gao and Ma believed this organic-inorganic hybrid could perform better, if the formula could be appropriately tweaked.

“When we thought about this class of material, we knew it should perform better than this,” Ma said. “We came up with our novel approach to solve some critical problems and get a high-performance LED.”