Tracking Down the "Missing" Carbon From the Martian Atmosphere 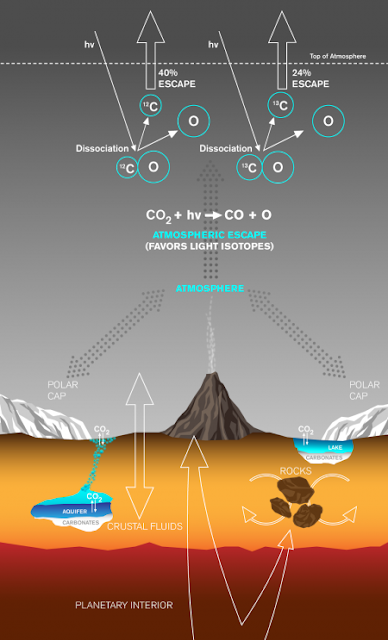 Carbon exchange and loss processes on Mars. Once in the atmosphere, CO2 can exchange
with the polar caps or dissolve into waters, which can precipitate out solid carbonatess.
CO2 in the atmosphere is lost to space at a rate controlled in part by the sun's activity.
Through the mechanism described in the study, UV radiation encounters a CO2 molecule
and produces CO and then C atoms. Since C-12 is more easily removed than the heavier
C-13, the current martian atmosphere is enriched in C-13.
Credit: Lance Hayashida/Caltech Office of Strategic Communications

(November 24, 2015)  Mars is blanketed by a thin, mostly carbon dioxide atmosphere—one that is far too thin to prevent large amounts of water on the surface of the planet from subliming or evaporating. But many researchers have suggested that the planet was once shrouded in an atmosphere many times thicker than Earth's. For decades that left the question, "Where did all the carbon go?"

Now a team of scientists from Caltech and JPL thinks they have a possible answer. The researchers suggest that 3.8 billion years ago, Mars might have had only a moderately dense atmosphere. They have identified a photochemical process that could have helped such an early atmosphere evolve into the current thin one without creating the problem of "missing" carbon and in a way that is consistent with existing carbon isotopic measurements.

The scientists describe their findings in a paper that appears in the November 24 issue of the journal Nature Communications.

"With this new mechanism, everything that we know about the martian atmosphere can now be pieced together into a consistent picture of its evolution," says Renyu Hu, a postdoctoral scholar at JPL, a visitor in planetary science at Caltech, and lead author on the paper.