Coming to a monitor near you: a defect-free, molecule-thick film 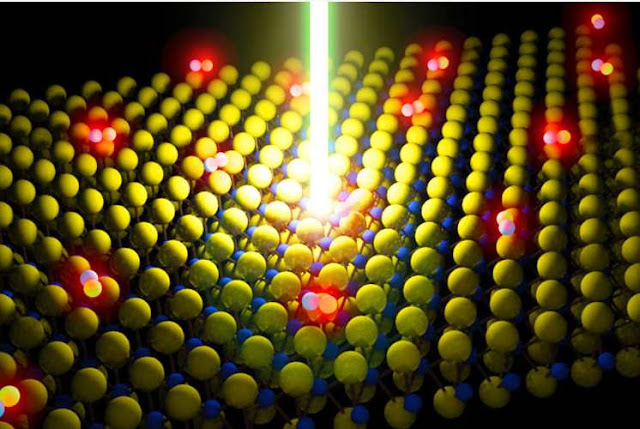 Schematic of a laser beam energizing a monolayer semiconductor made of
molybdenum disulfide, or MoS2. The red glowing dots are particles excited by
the laser. (Image by Der-Hsien Lien)

(November 26, 2015)  An emerging class of atomically thin materials known as monolayer semiconductors has generated a great deal of buzz in the world of materials science. Monolayers hold promise in the development of transparent LED displays, ultra-high efficiency solar cells, photo detectors and nanoscale transistors. Their downside? The films are notoriously riddled with defects, killing their performance.

But now a research team, led by engineers at UC Berkeley and Lawrence Berkeley National Laboratory, has found a simple way to fix these defects through the use of an organic superacid. The chemical treatment led to a dramatic 100-fold increase in the material’s photoluminescence quantum yield, a ratio describing the amount of light generated by the material versus the amount of energy put in. The greater the emission of light, the higher the quantum yield and the better the material quality. 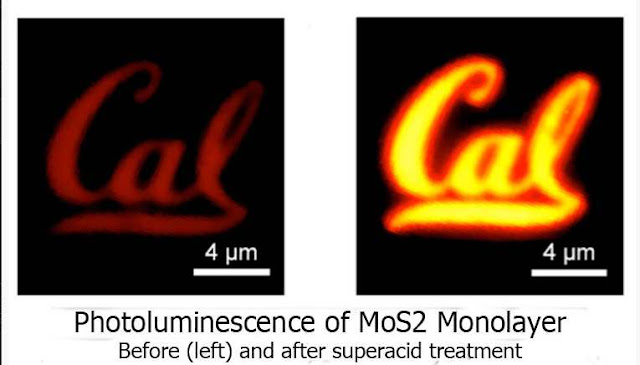 Shown is a MoS2 monolayer semiconductor shaped into a Cal logo. The image on the left
shows the material before it was treated with superacid. On the right is the monolayer after
treatment. The researchers were able to achieve two orders of magnitude improvement in
emitted light with the superacid treatment. (Image by Matin Amani)

The researchers enhanced the quantum yield for molybdenum disulfide, or MoS2, from less than 1 percent up to 100 percent by dipping the material into a superacid called bistriflimide, or TFSI.

Their findings, to be published in the Nov. 27 issue of Science, opens the door to the practical application of monolayer materials, such as MoS2, in optoelectronic devices and high-performance transistors. MoS2 is a mere seven-tenths of a nanometer thick. For comparison, a strand of human DNA is 2.5 nanometers in diameter.