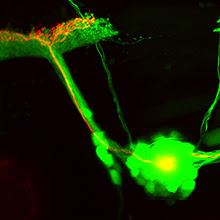 (November 17, 2015)  Scientists at Helmholtz Zentrum München have succeeded in stimulating the regeneration of injured neurons in living fish by the use of light. To this end, they employed so-called Optogenetics, i.e. light inducible protein activation. The results have recently been published in the journal ‘Current Biology’.

The nervous system is built to last a lifetime, but diverse diseases or environmental insults can overpower the capacity of neurons to maintain function or to repair after trauma. A team led by Dr. Hernán López-Schier, head of the Research Unit Sensory Biology and Organogenesis at Helmholtz Zentrum München, now succeeded in promoting the repair of an injured neural circuit in zebrafish.

Key for the researchers’ success was the messenger molecule cAMP, which is produced by an enzyme called adenylyl cyclase. For their experiment, the scientist used a special form of this enzyme which is inducible by blue light. Therefore, the scientists are able to specifically modulate the production of cAMP in cells expressing this enzyme by the use of blue light.*