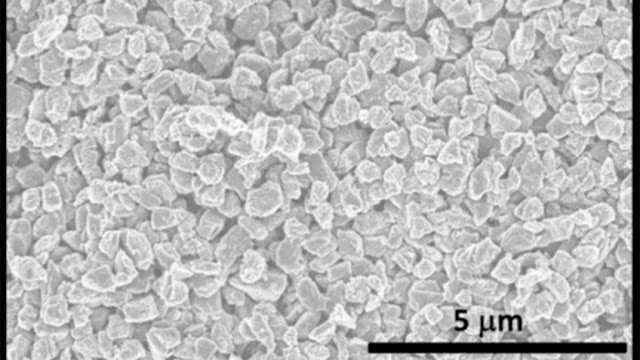 This is a scanning electron microscopy image of microdiamonds made using the new technique.

(November 30, 2015)  Researchers from North Carolina State University have discovered a new phase of solid carbon, called Q-carbon, which is distinct from the known phases of graphite and diamond. They have also developed a technique for using Q-carbon to make diamond-related structures at room temperature and at ambient atmospheric pressure in air.

Phases are distinct forms of the same material. Graphite is one of the solid phases of carbon; diamond is another.

“We’ve now created a third solid phase of carbon,” says Jay Narayan, the John C. Fan Distinguished Chair Professor of Materials Science and Engineering at NC State and lead author of three papers describing the work. “The only place it may be found in the natural world would be possibly in the core of some planets.”

Q-carbon has some unusual characteristics. For one thing, it is ferromagnetic – which other solid forms of carbon are not.

“We didn’t even think that was possible,” Narayan says.

In addition, Q-carbon is harder than diamond, and glows when exposed to even low levels of energy.