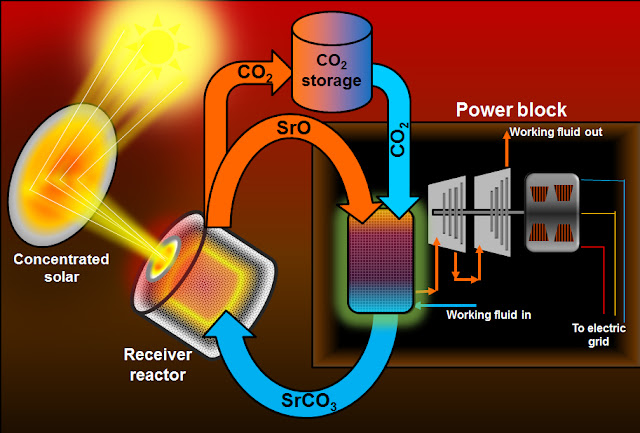 (November 3, 2015)  Engineers at Oregon State University have identified a new approach for the storage of concentrated solar thermal energy, to reduce its cost and make it more practical for wider use.

The advance is based on a new innovation with thermochemical storage, in which chemical transformation is used in repeated cycles to hold heat, use it to drive turbines, and then be re-heated to continue the cycle. Most commonly this might be done over a 24-hour period, with variable levels of solar-powered electricity available at any time of day, as dictated by demand.

The findings have been published in ChemSusChem, a professional journal covering sustainable chemistry. The work was supported by the SunShot Initiative of the U.S. Department of Energy, and done in collaboration with researchers at the University of Florida.

Conceptually, all of the energy produced could be stored indefinitely and used later when the electricity is most needed. Alternatively, some energy could be used immediately and the rest stored for later use.

Storage of this type helps to solve one of the key factors limiting the wider use of solar energy – by eliminating the need to use the electricity immediately. The underlying power source is based on production that varies enormously, not just night and day, but some days, or times of day, that solar intensity is more or less powerful. Many alternative energy systems are constrained by this lack of dependability and consistent energy flow.

Solar thermal electricity has been of considerable interest because of its potential to lower costs. In contrast to conventional solar photovoltaic cells that produce electricity directly from sunlight, solar thermal generation of energy is developed as a large power plant in which acres of mirrors precisely reflect sunlight onto a solar receiver. That energy has been used to heat a fluid that in turn drives a turbine to produce electricity.