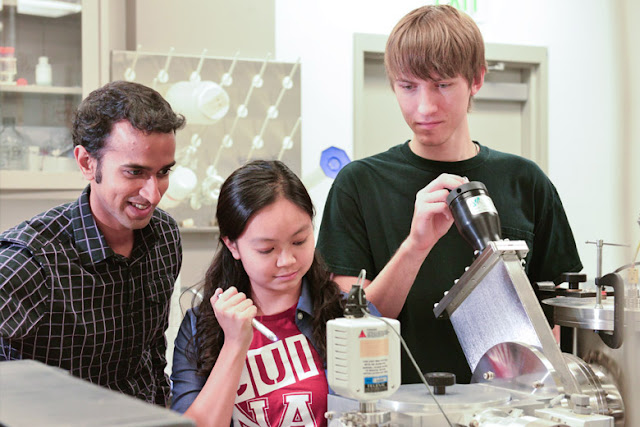 (November 25, 2015)  Stanford scientists have discovered how to make the electrical wiring on top of solar cells nearly invisible to incoming light. The new design, which uses silicon nanopillars to hide the wires, could dramatically boost solar-cell efficiency.

A solar cell is basically a semiconductor, which converts sunlight into electricity, sandwiched between metal contacts that carry the electrical current.

But this widely used design has a flaw: The critical but shiny metal on top of the cell reflects sunlight away from the semiconductor where electricity is produced, reducing the cell's efficiency.

Now, Stanford scientists have discovered how to hide the reflective upper contact and funnel light directly to the semiconductor below. Their findings, published in the journal ACS Nano, could lead to a new paradigm in the design and fabrication of solar cells.

"Using nanotechnology, we have developed a novel way to make the upper metal contact nearly invisible to incoming light," said study lead author Vijay Narasimhan, who conducted the work as a graduate student at Stanford. "Our new technique could significantly improve the efficiency and thereby lower the cost of solar cells."

In most solar cells, the upper contact consists of a metal wire grid that carries electricity to or from the device. But these wires also act like a mirror and prevent sunlight from reaching the semiconductor, which is usually made of silicon.

"The more metal you have on the surface, the more light you block," said study co-author Yi Cui, an associate professor of materials science and engineering.  "That light is then lost and cannot be converted to electricity."