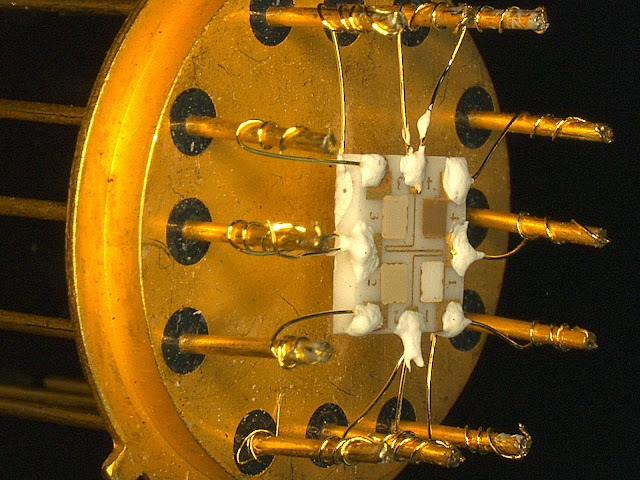 The sensor consists of four areas with different metal oxides. They change their
temperature-dependent electric resistance when coming into contact with gases.
(Photo: KIT/HsKA)

(November 26, 2015)  Hybrid Sensors Detect the Risk of Fires before They Can Even Be Noticed by Smell or Discoloration of Cable Insulations

Fires are frequently caused by smoldering cables. Novel sensors now help detect such smoldering fires at an early stage by analyzing the plastic vapors released by overheated insulating cables. Scientists of KIT and Karlsruhe University of Applied Sciences have developed these hybrid sensors that combine measurement processes with data evaluation. Their work is reported in the current issue of the Sensors & Transducers Journal.

A smoldering cable can be detected with a little luck before it starts burning: The plastic coating changes color, there is a smell of burning. Hybrid sensors might detect the risk of cable fires earlier, even before they are perceived by eyes and nose. They detect the gases released from the plastic coating due to heating and reliably identify and analyze the gas mixture and its concentration.

In addition, they can also detect interfering gases, such as propene or carbon monoxide, and, hence, exclude false alarms. To this end, the hybrid sensors do not only possess a gas-detecting sensor chip, but also the computation capacity and algorithms needed for evaluating measured data. “The combination of a smart evaluation process with physical measurement is the basic idea of this development,” Dr. Hubert Keller, Simulation and Measurement Project Head of KIT’s Institute for Applied Computer Science, explains.