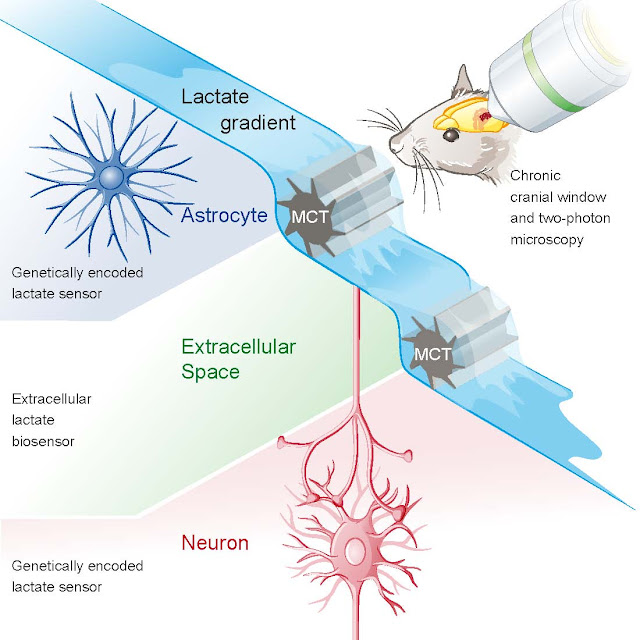 (November 24, 2015)  Nerve cells cover their high energy demand with glucose and lactate. Scientists of the University of Zurich now provide new support for this. They show for the first time in the intact mouse brain evidence for an exchange of lactate between different brain cells. With this study they were able to confirm a 20-year old hypothesis.

In comparison to other organs, the human brain has the highest energy requirements. The supply of energy for nerve cells and the particular role of lactic acid (lactate) has been a matter of intense research for many years. A hypothesis from the 1990’s postulates, that a well-orchestrated collaboration between two cell types, astrocytes and neurons, is the basis of brain energy metabolism. Astrocytes produce lactate, which flows to neurons to cover their high energy needs. Due to a lack of experimental techniques, it remained unclear whether an exchange of lactate existed between astrocytes and neurons. The group of Professor Bruno Weber from the Institute of Pharmacology and Toxicology now shows that there is a significant concentration gradient of lactate between astrocytes and neurons.

Lactate transport is dependent on concentration
The entry and exit of lactate into and out of cells of the body is concentration dependent and is mediated by a specific lactate transporter (called monocarboxylate transporter or MCT). A typical property of certain transporter proteins is called trans-acceleration. “MCTs can be imagined as revolving doors in a shopping mall, which begin to turn faster when more people enter or exit”, explains Bruno Weber, Professor of Multimodal Experimental Imaging at the University of Zurich. The researchers made use of this property and accelerated the “revolving doors”. By increasing the extracellular pyruvate concentration, they stimulated the outward transport of lactate. Interestingly, lactate levels only changed in astrocytes but not in neurons. Based on this finding and on results from several control experiments a clear lactate gradient between astrocytes and neurons was confirmed. “Due to the fact that lactate transport by MCTs is a passive transport, such a concentration difference is a necessary condition for a lactate flux to be present”, says Bruno Weber.