A Record-setting Way to Make Transparent Conductors: Spread Them Like Butter on Toast 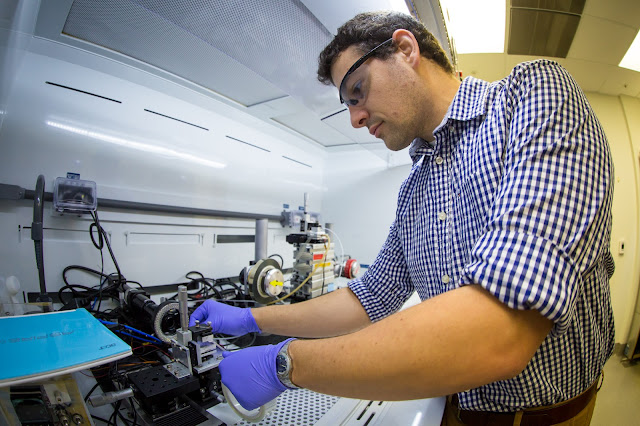 Stanford and SLAC postdoctoral researcher Sean Andrews with an instrument used to spread
a thin layer of conductive polymers onto a transparent film with a matchbook-sized silicon blade.
The process, called “solution shearing,” was used to make patterned electrodes for a solar cell
and a sensor, and shows promise for scaling up for use in industry. (SLAC National Accelerator Laboratory)

(November 3, 2015)  Stanford, SLAC Process Has Potential for Scaling Up to Manufacture Solar Cells, Displays and More

Scientists from Stanford University and the Department of Energy’s SLAC National Accelerator Laboratory have shown they can make flexible, transparent electrical conductors with record-high performance for use in solar cells, displays and other devices by spreading polymers on a clear surface with a tiny blade, like a knife spreading butter on toast.

The technique, reported Oct. 29 in the advance online edition of Proceedings of the National Academy of Sciences, has already been used to make patterned electrodes for touch sensors and organic solar cells, and with further development could be a tool for manufacturing transparent conductors on a large scale. 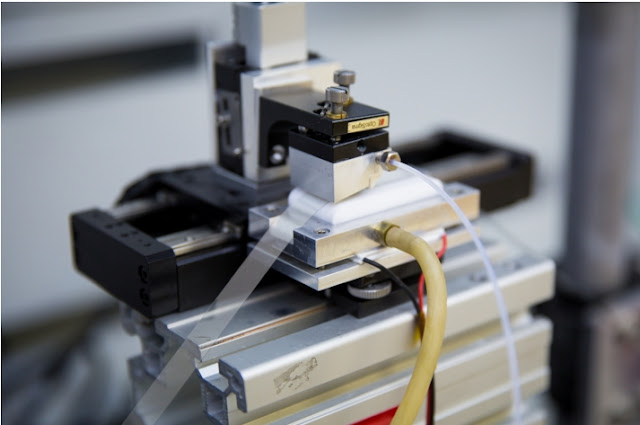 A close-up of the solution shearing apparatus. Transparent conductors made with the technique
had record-high electrical conductivity for this material, demonstrating that high performance can be
achieved just by controlling the way they are manufactured. (SLAC National Accelerator Laboratory)

“We were able to achieve record-high conductivity with a material people have known for years, just by tuning the coating process,” said Zhenan Bao, a Stanford professor and member of SIMES, the Stanford Institute for Materials and Energy Sciences at SLAC, who led the study. “That shows there’s a lot of room for achieving high performance through controlling the assembly and structure of materials at the molecular scale.”

Bao’s group developed this “solution shearing” technique in close collaboration with Michael Toney and Stefan Mannsfeld, staff scientists at SLAC’s Stanford Synchrotron Radiation Lightsource (SSRL), whose teams used X-rays to look at the structures and properties of the finished films.

Transparent conductors are used where it’s important to get light in or out of a device, such as in solar cells, electromagnetic shielding, antistatic layers and lighting displays. Today these conductors are mostly made with indium tin oxide, or ITO. But ITO is expensive to work with, and it isn’t compatible with the flexible displays being developed for a new generation of TV screens, computers and other electronics.