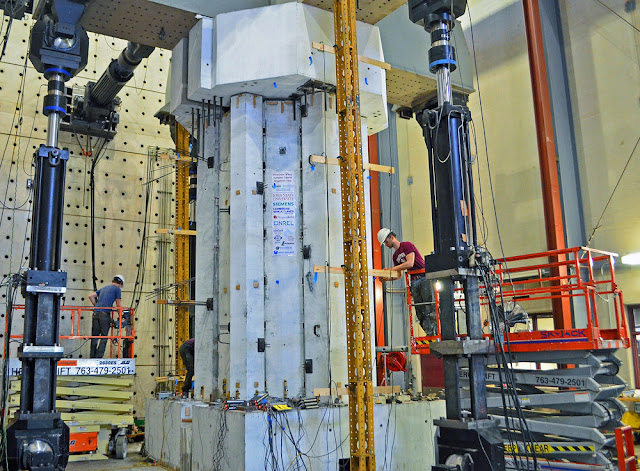 (November 11, 2015)  Hydraulic equipment in two civil engineering labs recently pushed and pulled at test sections of a new kind of wind turbine tower, simulating the heavy, twisting loads that towers have to withstand.

In Iowa State University’s Structural Engineering Research Laboratory, an actuator rocked a 12-foot-high and 6.5-foot-wide test section with 100,000 pounds of force every 1.25 seconds. The test section’s two panels and two columns only moved a tenth of an inch, but the movement was visible – especially the swaying of the long wires attached to 65 strain and displacement sensors.

Those sensors collected data 50 times every second over weeks of fatigue testing. Meanwhile, Hartanto Wibowo, an Iowa State postdoctoral research associate, was on the lookout for tiny cracks or any other signs of wear in the test section, particularly around the prestressing cables connecting the panels and columns.

An experiment at the University of Minnesota’s MAST Laboratory tested operational and extreme wind turbine tower loads on a full-scale cross section of a tower – an assembly that was 16 feet 7 inches high, 8 feet in diameter and included six panels and six columns tied together with prestressing cables. Engineers took data to see if the assembled tower pieces would hold up under the loads and whether they’d transfer the load from piece to piece and act as a single unit.

Sri Sritharan, Iowa State University’s Wilson Engineering Professor in Civil, Construction and Environmental Engineering and a member of the College of Engineering’s Wind Energy Initiative, said the tower cross section had no trouble resisting the loads and preliminary data analysis confirms that observation.