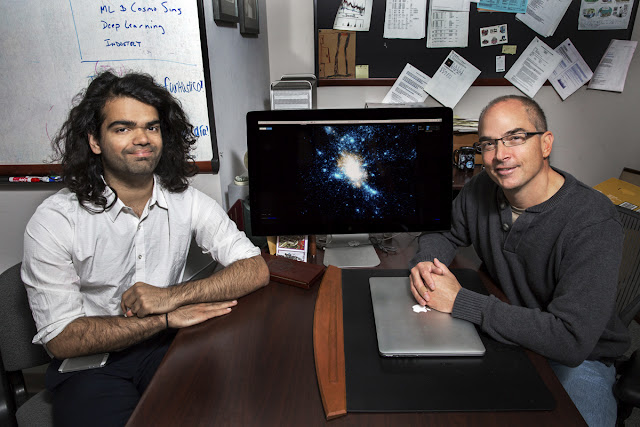 A new, faster modeling technique for galaxy formation has been developed
by University of Illinois student Harshil Kamdar and professor Robert Brunner.
The technique uses machine learning to cut down computing times from
thousands of computing

(November 11, 2015)  A new machine-learning simulation system developed at the University of Illinois promises cosmologists an expanded suite of galaxy models – a necessary first step to developing more accurate and relevant insights into the formation of the universe.

The feasibility of this method has been laid out in two recent papers written by astronomy, physics and statistics professor Robert Brunner, his undergraduate student Harshil Kamdar and National Center for Supercomputing Applications research scientist Matthew Turk.

Cosmologists currently use two simulation approaches. The first is an N-body simulation, which models how dark matter collapses under gravity. These simulations, when coupled with a semianalytical model, let astronomers model how galaxies form. The second is a hydrodynamical N-body simulation, which lets astronomers directly model how normal matter interacts with dark matter under gravitational collapse to form galaxies; this more computationally intensive approach directly shows how invisible clumps of dark matter, referred to as halos, influence star formation.