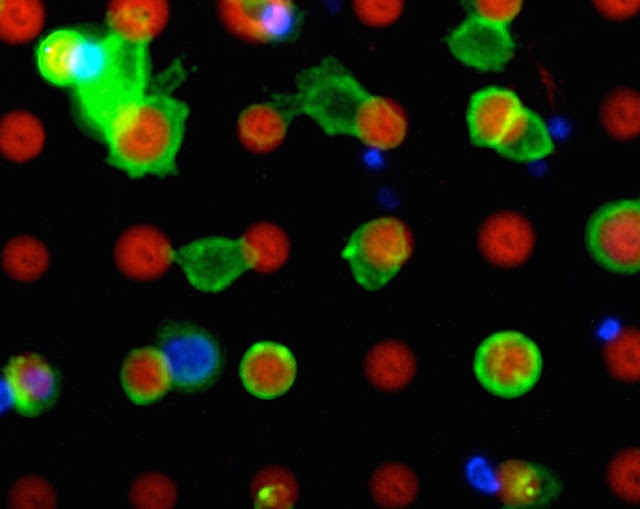 (November 23, 2015)  KIT Researchers Develop a New Method to Detect Cancer Cells in the Blood before They Settle in the Tissue and Form a New Tumor.

Many tumors spread: Single cancer cells migrate with blood flow through the body before they settle in new tissue. In this way, metastases may be formed, even after the main tumor was treated successfully. It is difficult to detect cancer cells in the blood at an early stage: About one malignant cell is encountered per billion of healthy cells. Researchers of KIT and the Center for Nanotechnology (CeNTech), Münster, have now developed a clinical method to reliably detect and isolate single cancer cells in blood samples in cooperation with the University Hospital of Hamburg-Eppendorf (UKE).

“Detection of cancer cells in blood in the early stage of a disease is difficult, because concentrations of the cancer cells are extremely small,” Harald Fuchs, Section Head of the KIT Institute of Nanotechnology (INT), holder of a chair at the Physical Institute of the University of Münster (WWU), and Scientific Director of the Center for NanoTechnology (CeNTech), Münster, explains. “We are searching for the needles in the haystack.” The number of extracted tumor cells allows conclusions to be drawn with respect to the success of therapy and the future course of the disease. Genetic analysis of cells allows therapies to be adapted to the type of cancer to be treated.

“With our method, we reach a very high hit rate: More than 85 percent of the extracted cells really are cancer cells,” Michael Hirtz says. His young investigators group of INT is largely involved in the development work. “In addition, we can sample suspicious cells undamaged and study them in more detail.” Medical tests of patient blood samples were carried out by the team of Klaus Pantel of the University Hospital of Hamburg-Eppendorf. Moreover, the newly developed method can be transferred to all applications, where rare cells in blood or other body liquids have to be isolated.