STRATEGY BASED ON HUMAN REFLEXES MAY KEEP LEGGED ROBOTS, PROSTHETIC LEGS FROM TRIPPING 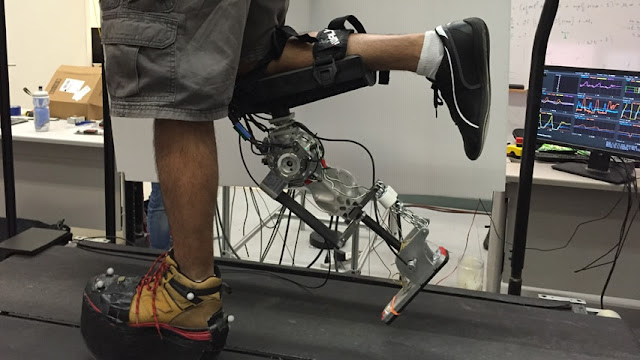 (November 18, 2015)  Trips and stumbles too often lead to falls for amputees using leg prosthetics, but a robotic leg prosthesis being developed at Carnegie Mellon University promises to help users recover their balance by using techniques based on the way human legs are controlled.

Hartmut Geyer, assistant professor of robotics, said a control strategy devised by studying human reflexes and other neuromuscular control systems has shown promise in simulation and in laboratory testing, producing stable walking gaits over uneven terrain and better recovery from trips and shoves.

Over the next three years, as part of a $900,000 National Robotics Initiative study funded through the National Science Foundation, this technology will be further developed and tested using volunteers with above-the-knee amputations.

Joining Geyer on the research team are Steve Collins, associate professor of mechanical engineering and robotics, and Santiago Munoz, a certified prosthetist orthotist and instructor in the Department of Rehabilitation Science and Technology at the University of Pittsburgh.

“Powered prostheses can help compensate for missing leg muscles, but if amputees are afraid of falling down, they won’t use them,” Geyer said. “Today’s prosthetics try to mimic natural leg motion, yet they can’t respond like a healthy human leg would to trips, stumbles and pushes. Our work is motivated by the idea that if we understand how humans control their limbs, we can use those principles to control robotic limbs.”