Shocking new way to get the salt out 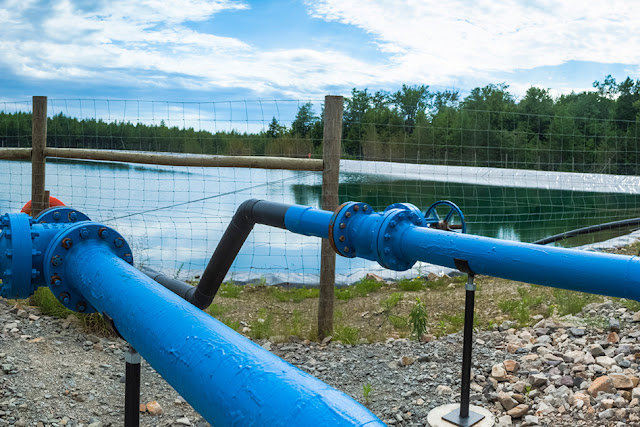 Researchers say the new desalination method could be useful for cleaning the
contaminated water generated by hydraulic fracturing, or fracking.
Shown here is a holding pit for fracking water.

(November 12, 2015)  As the availability of clean, potable water becomes an increasingly urgent issue in many parts of the world, researchers are searching for new ways to treat salty, brackish or contaminated water to make it usable. Now a team at MIT has come up with an innovative approach that, unlike most traditional desalination systems, does not separate ions or water molecules with filters, which can become clogged, or boiling, which consumes great amounts of energy.

Instead, the system uses an electrically driven shockwave within a stream of flowing water, which pushes salty water to one side of the flow and fresh water to the other, allowing easy separation of the two streams. The new approach is described in the journal Environmental Science and Technology Letters, in a paper by professor of chemical engineering and mathematics Martin Bazant, graduate student Sven Schlumpberger, undergraduate Nancy Lu, and former postdoc Matthew Suss.

This approach is “a fundamentally new and different separation system,” Bazant says. And unlike most other approaches to desalination or water purification, he adds, this one performs a “membraneless separation” of ions and particles. 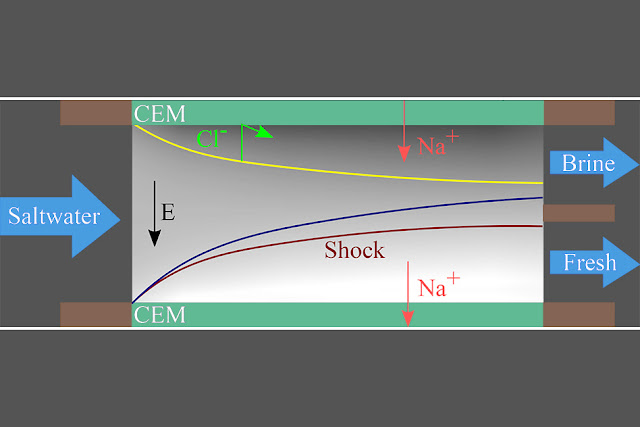 Diagram of the new process shows how a shockwave (red line) is generated in salty
water flowing through a porous medium, with a voltage applied to membranes (green)
at each side of the vessel. The shockwave pushed the salt ions off to one side of the flow,
leaving fresh water at the other side, where it can be separated out.

Membranes in traditional desalination systems, such as those that use reverse osmosis or electrodialysis, are “selective barriers,” Bazant explains: They allow molecules of water to pass through, but block the larger sodium and chlorine atoms of salt. Compared to conventional electrodialysis, “This process looks similar, but it’s fundamentally different,” he says.

In the new process, called shock electrodialysis, water flows through a porous material —in this case, made of tiny glass particles, called a frit — with membranes or electrodes sandwiching the porous material on each side. When an electric current flows through the system, the salty water divides into regions where the salt concentration is either depleted or enriched. When that current is increased to a certain point, it generates a shockwave between these two zones, sharply dividing the streams and allowing the fresh and salty regions to be separated by a simple physical barrier at the center of the flow.