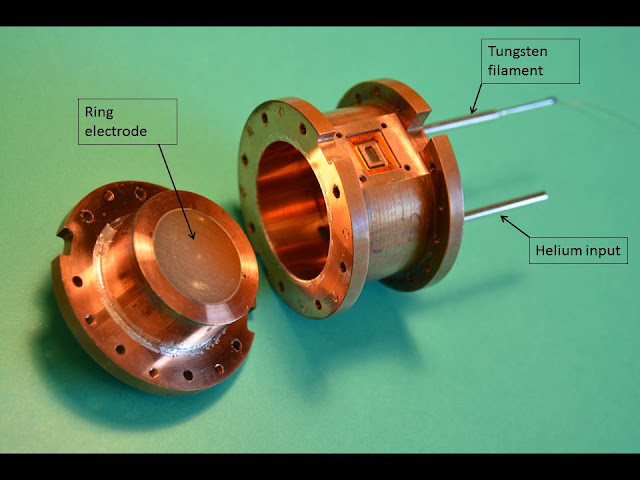 Experimental cell used for the experiment of electron incompressibility. The cell is open
to show the ring electrodes. The tungsten filament that provides the electrons and
the input for liquid helium are also indicated.

(November 2, 2015)  Helium usually reminds people of colorful gas balloons. However, helium is much more than the filling for these children’s treats.  It also helps quantum physicists to study the most exotic and hidden properties of matter. An international team led by Denis Konstantinov, Professor at the Okinawa Institute of Science and Technology Graduate University (OIST), discovered a condition by which electrons trapped on the surface of liquid helium become incompressible at very low temperatures and under microwave radiation. These findings were published in Nature

Communications in collaboration with researchers from the Universite’ Paris-Sud and the RIKEN Institute. Compressibility measures a change of volume when a pressure is applied. Normally compressibility is always positive. But more pressure results in less volume. Imagine a rubber ball: the more you press it, the more it squeezes. This happens because the distance between the atoms of the rubber ball decreases when you apply pressure. The same is true even for solid objects, like a table. Although you cannot perceive it, if you press on a table, you actually force the table to become just a little bit thinner. On the other hand, in a condition of zero compressibility, even if you increase the applied pressure, you cannot change the volume. Konstantinov and his collaborators are interested in studying these curious states and found that under specific conditions, electrons’ compressibility becomes zero. 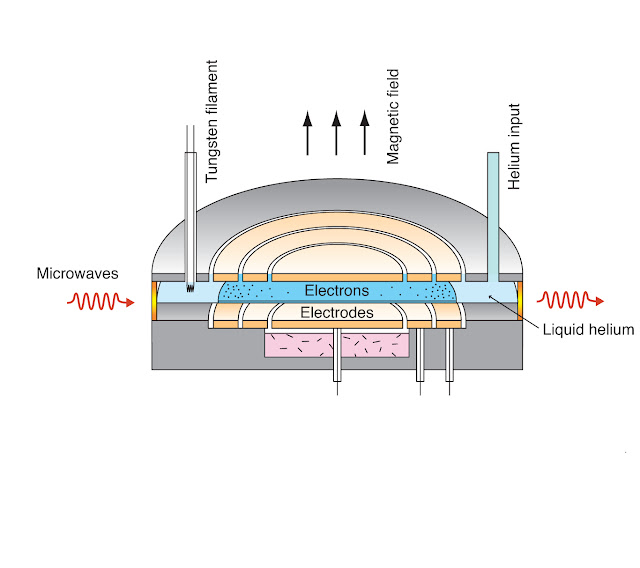 EXperimental cell used for the experiment of electron incompressibility. The cell is open
to show the ring electrodes. The tungsten filament that provides the electrons and
the input for liquid helium are also indicated.

The team is studying electrons pulsed out from a tungsten filament and trapped on the surface of liquid helium at extremely low temperatures. Helium was chosen because it is the only known quantum liquid: it becomes liquid at low temperatures and it remains liquid even at zero Kelvin. Moreover, it is free of impurities and it can form a very smooth surface with only tiny ripples of less than 1 Angstrom, which is comparable to the size of a helium atom. In a 3D space, usually particles can move in every direction, but at low temperatures the system of trapped electrons can be simplified to a 2D configuration and the scientists can concentrate on the 2D movement of the electrons on the surface of the helium layer.