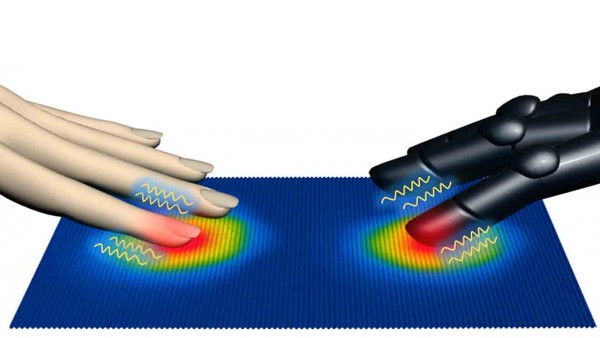 (October 31, 2015)  Fake fingerprints might sound like just another ploy to fool the feds. But the world’s first artificial prints—reported today—have even cooler applications. The electronic material, which mimics the swirling designs imprinted on every finger, can sense pressure, temperature, and even sound. Though the technology has yet to be tested outside the lab, researchers say it could be key to adding sensation to artificial limbs or even enhancing the senses we already have.

“It’s an interesting piece of work,” says John Rogers, materials scientist at the University of Illinois, Urbana-Champaign, who was not involved in the study. “It really adds to the toolbox of sensor types that can be integrated with the skin.”

Electronic skins, known as e-skins, have been in development for years. There are several technologies used to mimic the sensations of real human skin, including sensors that can monitor health factors like pulse or temperature. But previous e-skins have been able to “feel” only two sensations: temperature and pressure. And there are additional challenges when it comes to replicating fingertips, especially when it comes to mimicking their ability to sense even miniscule changes in texture, says Hyunhyub Ko, a chemical engineer at Ulsan National Institute of Science and Technology in South Korea.

So in the new study, Ko and colleagues started with a thin, flexible material with ridges and grooves much like natural fingerprints. This allowed them to create what they call a “microstructured ferroelectric skin” (expanded in the figure below). The e-skin’s perception of pressure, texture, and temperature all come from a highly sensitive structure called an interlocked microdome array—the tiny domes sandwiched in the bottom two layers of the e-skin, also shown in the figure below. 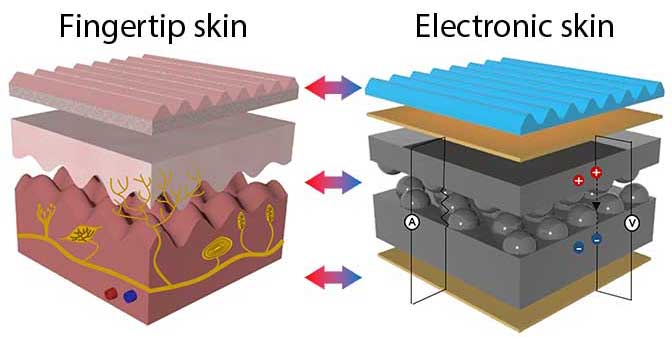 Here’s how it works: When pressure from the outside squishes the two layers together, an electric current is created, running through the thickness of the material. The current is then monitored through electrodes and registered as pressure—the larger the current, the stronger the pressure. The skin can also sense temperature, the team reports today in Science Advances, though in ways similar to other technologies. When exposed to warmth, the e-skin material relaxes, but when cooled, it stiffens. In both cases, subtle changes in stiffness generate currents that scientists can record as temperature spikes or drops, much in the same way that they infer pressure from currents.