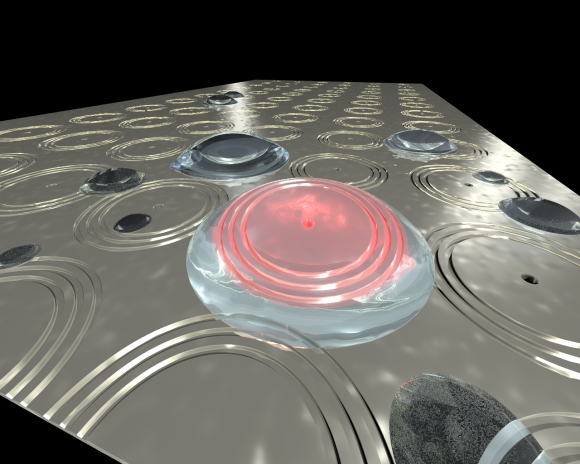 Light from within
Plasmonic interferometers that have light emitters within them
could make for better, more compact biosensors.
Pacifici Lab / Brown University

(February 10, 2016)  A technique called plasmonic interferometry has the potential to enable compact, ultra-sensitive biosensors for a variety of applications. A fundamental advance made by Brown University engineers could help make such devices more practical.

Imagine a hand-held environmental sensor that can instantly test water for lead, E. coli, and pesticides all at the same time, or a biosensor that can perform a complete blood workup from just a single drop. That’s the promise of nanoscale plasmonic interferometry, a technique that combines nanotechnology with plasmonics—the interaction between electrons in a metal and light.

Now researchers from Brown University’s School of Engineering have made an important fundamental advance that could make such devices more practical. The research team has developed a technique that eliminates the need for highly specialized external light sources that deliver coherent light, which the technique normally requires. The advance could enable more versatile and more compact devices.

“It has always been assumed that coherent light was necessary for plasmonic interferometry,” said Domenico Pacifici, a professor of engineering who oversaw the work with his postdoctoral researcher Dongfang Li, and graduate student Jing Feng. “But we were able to disprove that assumption.”

Plasmonic interferometers make use of the interaction between light and surface plasmon polaritons, density waves created when light energy rattles free electrons in a metal. One type of interferometer looks like a bull’s-eye structure etched into a thin layer of metal. In the center is a hole poked through the metal layer with a diameter of about 300 nanometers—about 1,000 times smaller than the diameter of a human hair. The hole is encircled by a series of etched grooves, with diameters of a few micrometers. Thousands of these bulls-eyes can be placed on a chip the size of a fingernail.