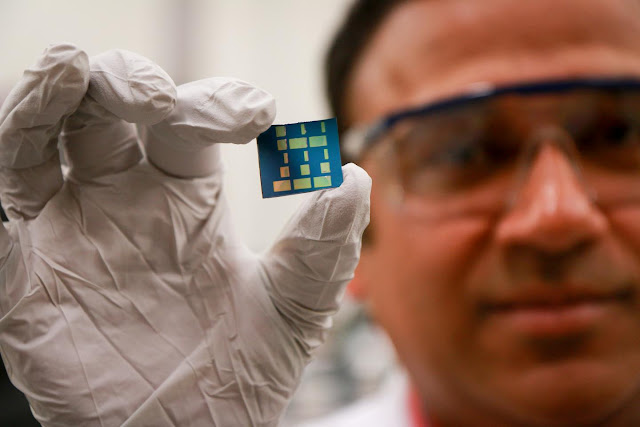 University of Utah materials science and engineering associate professor Ashutosh Tiwari
holds up a substrate layered with a newly discovered 2-D material made of tin and oxygen.
Tiwari and his team have discovered this new material, tin monoxide, which allows electrical
charges to move through it much faster than common 3-D material such as silicon.
This breakthrough in semiconductor material could lead to much faster computers and mobile
devices such as smartphones that also run on less power and with less heat.
Credit: Dan Hixson/University of Utah College of Engineering

University of Utah engineers have discovered a new kind of 2D semiconducting material for electronics that opens the door for much speedier computers and smartphones that also consume a lot less power.

The semiconductor, made of the elements tin and oxygen, or tin monoxide (SnO), is a layer of 2D material only one atom thick, allowing electrical charges to move through it much faster than conventional 3D materials such as silicon. This material could be used in transistors, the lifeblood of all electronic devices such as computer processors and graphics processors in desktop computers and mobile devices. The material was discovered by a team led by University of Utah materials science and engineering associate professor Ashutosh Tiwari. A paper describing the research was published online Monday, Feb. 15, in the journal, Advanced Electronic Materials. The paper, which also will be the cover story on the printed version of the journal, was co-authored by University of Utah materials science and engineering doctoral students K. J. Saji and Kun Tian, and Michael Snure of the Wright-Patterson Air Force Research Lab near Dayton, Ohio.

Transistors and other components used in electronic devices are currently made of 3D materials such as silicon and consist of multiple layers on a glass substrate. But the downside to 3D materials is that electrons bounce around inside the layers in all directions.

The benefit of 2D materials, which is an exciting new research field that has opened up only about five years ago, is that the material is made of one layer the thickness of just one or two atoms. Consequently, the electrons “can only move in one layer so it’s much faster,” says Tiwari.