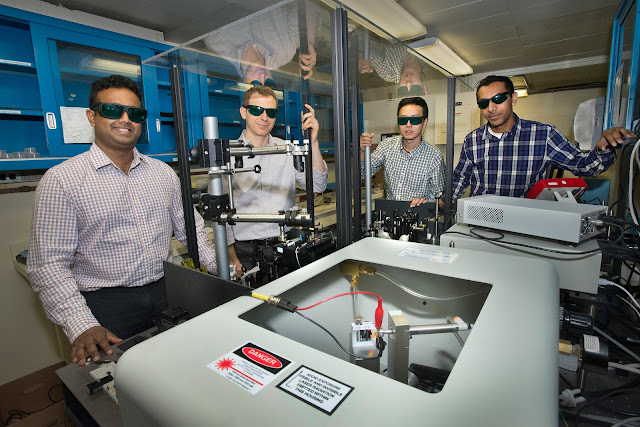 (February 12, 2016)  Scientists' use of common glass to optimize graphene's electronic properties could improve technologies from flat screens to solar cells

Graphene, the two-dimensional powerhouse, packs extreme durability, electrical conductivity, and transparency into a one-atom-thick sheet of carbon. Despite being heralded as a breakthrough "wonder material," graphene has been slow to leap into commercial and industrial products and processes.

Now, scientists have developed a simple and powerful method for creating resilient, customized, and high-performing graphene: layering it on top of common glass. This scalable and inexpensive process helps pave the way for a new class of microelectronic and optoelectronic devices—everything from efficient solar cells to touch screens.

Left: Schematic of a graphene field-effect-transistor used in this study. The device consists of
a solar cell containing graphene stacked on top of a high-performance copper indium gallium
diselenide (CIGS) semiconductor, which in turn is stacked on an industrial substrate (either soda-lime
glass, SLG, or sodium-free borosilicate glass, BSG). The research revealed that the SLG substrate
serves as a source of sodium doping, and improved device performance in a way not seen in the
sodium-free substrate. Right: A scanning electron micrograph of the device as seen from above, with
the white scale bar measuring 10 microns, and a transmission electron micrograph inset of the
CIGS/graphene interface where the white scale bar measures 100 nanometers.

The collaboration—led by scientists at the U.S. Department of Energy's (DOE) Brookhaven National Laboratory, Stony Brook University (SBU), and the Colleges of Nanoscale Science and Engineering at SUNY Polytechnic Institute—published their results February 12, 2016, in the journal Scientific Reports.

"We believe that this work could significantly advance the development of truly scalable graphene technologies," said study coauthor Matthew Eisaman, a physicist at Brookhaven Lab and professor at SBU.