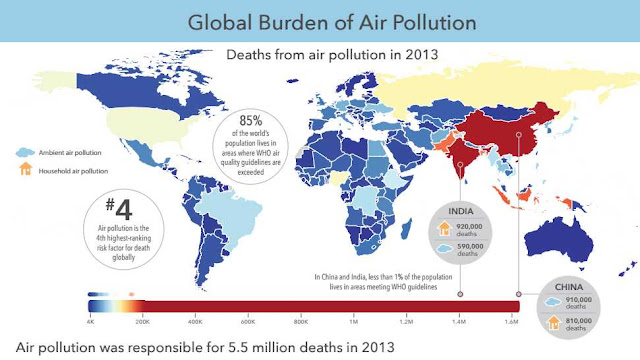 (February 14, 2016)  New research shows that more than 5.5 million people die prematurely every year due to household and outdoor air pollution. More than half of deaths occur in two of the world’s fastest growing economies, China and India.

Power plants, industrial manufacturing, vehicle exhaust and burning coal and wood all release small particles into the air that are dangerous to a person’s health. New research, presented today at the 2016 annual meeting of the American Association for the Advancement of Science (AAAS), found that despite efforts to limit future emissions, the number of premature deaths linked to air pollution will climb over the next two decades unless more aggressive targets are set.

“Air pollution is the fourth highest risk factor for death globally and by far the leading environmental risk factor for disease,” said Michael Brauer, a professor at the University of British Columbia’s School of Population and Public Health in Vancouver, Canada. “Reducing air pollution is an incredibly efficient way to improve the health of a population.“

Their analysis shows that the two countries account for 55 per cent of the deaths caused by air pollution worldwide. About 1.6 million people died of air pollution in China and 1.4 million died in India in 2013.

In China, burning coal is the biggest contributor to poor air quality. Qiao Ma, a PhD student at the School of Environment, Tsinghua University in Beijing, China, found that outdoor air pollution from coal alone caused an estimated 366,000 deaths in China in 2013.