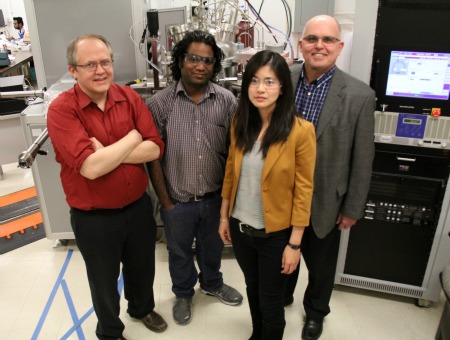 (February 9, 2016)  An engineering research team at the University of Alberta has invented a new transistor that could revolutionize thin-film electronic devices.

Their findings, published in the prestigious science journal Nature Communications (read the article here), could open the door to the development of flexible electronic devices with applications as wide-ranging as display technology to medical imaging and renewable energy production.

The team was exploring new uses for thin film transistors (TFT), which are most commonly found in low-power, low-frequency devices like the display screen you’re reading from now. Efforts by researchers and the consumer electronics industry to improve the performance of the transistors have been slowed by the challenges of developing new materials or slowly improving existing ones for use in traditional thin film transistor architecture, known technically as the metal oxide semiconductor field effect transistor (MOSFET).

But the U of A electrical engineering team did a run-around on the problem. Instead of developing new materials, the researchers improved performance by designing a new transistor architecture that takes advantage of a bipolar action. In other words, instead of using one type of charge carrier, as most thin film transistors do, it uses electrons and the absence of electrons (referred to as “holes”) to contribute to electrical output. Their first breakthrough was forming an ‘inversion’ hole layer in a ‘wide-bandgap’ semiconductor, which has been a great challenge in the solid-state electronics field.