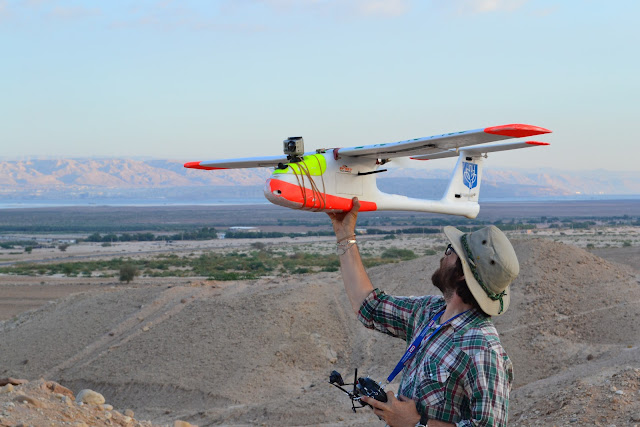 Austin “Chad” Hill, a research scientist at the University of Connecticut, prepares a fixed
wing drone for a flight over the landscape at Fifa in Jordan. Hill works with archaeologist
Morag M. Kersel, an assistant professor at DePaul University, using drones for site documentation
and monitoring at the site with the support of the Jordanian Department of Antiquities.
(Photo by Morag M. Kersel, courtesy of the Follow the Pots Project)

(February 14, 2016)  “Drones are proving to be powerful new tools to archaeologists for documenting excavation, mapping landscapes and identifying buried features. They also can be applied to monitor site destruction and looting in the present,” said Morag M. Kersel, an assistant professor of anthropology at DePaul.

Kersel, whose research focus is on trade and antiquities, described how drones are an emerging tool for archeology during a presentation Feb. 14 at the annual meeting of the American Association for the Advancement of Science. Kersel’s presentation, "UAVs for Site Documentation and Monitoring," was part of a session that examined the protection of cultural heritage sites and artifacts.

“Three seasons of monitoring at Fifa have demonstrated that UAVs can provide quantifiable evidence for the rate of ongoing site damage, even in contexts where other remote sensing systems would provide insufficient data,” said Kersel.

“Between 2013-14, we had 34 new looting episodes — holes — clearly people were still looting. In the next year, there’s very little or no evidence of looting. Why?” Kersel said. “Is it because there is no demand Early Bronze Age ceramics?

“An element of the ongoing research is the examination of why looting has abated? Are there no more graves to loot? Have looters found more lucrative financial resources? Are the Department of Antiquities and NGO initiatives working?” she asked.