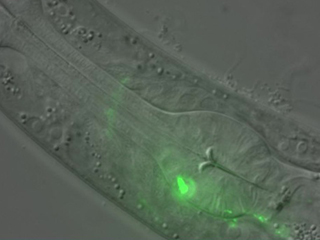 (February 11, 2016) Members of neuroscientist Cori Bargmann’s lab spend quite a bit of their time watching worms move around. These tiny creatures, Caenorhabditis elegans, feed on soil bacteria, and their very lives depend on their ability to distinguish toxic microbes from nutritious ones. In a recent study, Bargmann and her colleagues have shown that worms in their first larval stage can learn what harmful bacterial strains smell like, and form aversions to those smells that last into adulthood.

Many animals are capable of making vital, lifelong memories during a critical period soon after birth. The phenomenon, known as imprinting, allows newly hatched geese to bond with their moms, and makes it possible for salmon to return to their native stream after spawning. And while the learning processes of humans may be more complex and subtle, scientists have long known that our brain’s ability to store a memory and maintain it long-term depends on when and how that memory was acquired.

“In the case of worms, we were fascinated to discover that their small and simple nervous system is capable of not only remembering things, but of forming long-term memories,” says Bargmann, who is Torsten N. Wiesel Professor and head of the Lulu and Anthony Wang Laboratory of Neural Circuits and Behavior, as well as co-director of the new Kavli Neural Systems Institute at Rockefeller. “It invites the question of whether learning processes that happen during different life stages are biologically different.”