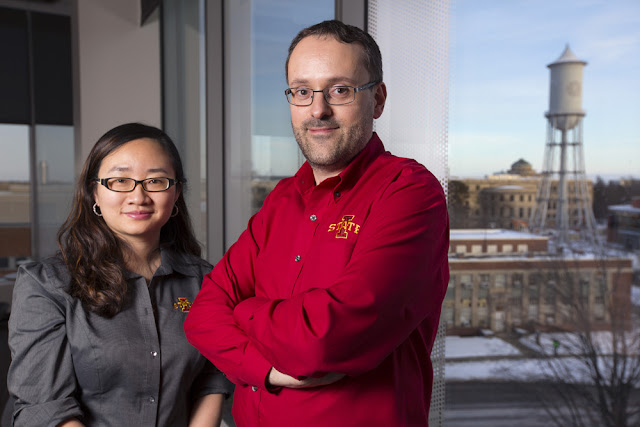 Zengyi Shao and Jean-Philippe Tessonnier, left to right, are combining
their expertise in biocatalysis and chemical catalysis to produce a new type
of biobased nylon. Photo by Christopher Gannon.

(February 9, 2016)  Engineers at Iowa State University have found a way to combine a genetically engineered strain of yeast and an electrocatalyst to efficiently convert sugar into a new type of nylon.

The engineers’ successful hybrid conversion process is described online and as the cover paper of the Feb. 12 issue of the journal Angewandte Chemie International Edition.

“The ideal biorefinery pipelines, from biomass to the final products, are currently disrupted by a gap between biological conversion and chemical diversification. We herein report a strategy to bridge this gap with a hybrid fermentation and electrocatalytic process,” wrote lead authors Zengyi Shao and Jean-Philippe Tessonnier, Iowa State assistant professors of chemical and biological engineering who are also affiliated with the National Science Foundation Engineering Research Center for Biorenewable Chemicals (CBiRC) based at Iowa State.

The process described by the engineers “opens the door to the production of a broad range of compounds not accessible from the petrochemical industry,” Shao said.

Moving forward, the engineers will work to scale up their technology by developing a continuous conversion process, said Tessonnier, who’s a Carol and Jack Johnson Faculty Fellow and also an associate scientist with the U.S. Department of Energy’s Ames Laboratory.