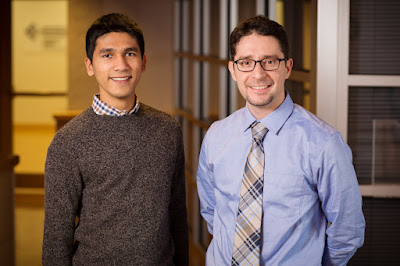 (February 5, 2016)  The technology that charges batteries for electronic devices could provide fresh water from salty seas, says a new study by University of Illinois engineers. Electricity running through a salt water-filled battery draws the salt ions out of the water.

Illinois mechanical science and engineering professor Kyle Smith and graduate student Rylan Dmello published their work in the Journal of the Electrochemical Society.

“We are developing a device that will use the materials in batteries to take salt out of water with the smallest amount of energy that we can,” Smith said. “One thing I’m excited about is that by publishing this paper, we’re introducing a new type of device to the battery community and to the desalination community.”

Interest in water desalination technology has risen as water needs have grown, particularly in drought-stricken areas. However, technical hurdles and the enormous amounts of energy required have prevented wide-scale implementation. The most-used method, reverse osmosis, pushes water through a membrane that keeps out the salt, a costly and energy-intensive process. By contrast, the battery method uses electricity to draw charged salt ions out of the water. 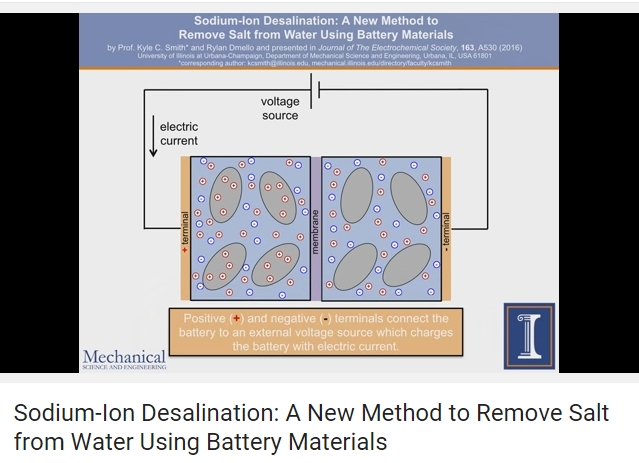 The researchers were inspired by sodium ion batteries, which contain salt water. Batteries have two chambers, a positive electrode and a negative electrode, with a separator in between that the ions can flow across. When the battery discharges, the sodium and chloride ions – the two elements of salt – are drawn to one chamber, leaving desalinated water in the other.

In a normal battery, the ions diffuse back when the current flows the other direction. The Illinois researchers had to find a way to keep the salt out of the now-pure water.

“In a conventional battery, the separator allows salt to diffuse from the positive electrode into the negative electrode,” Smith said. “That limits how much salt depletion can occur. We put a membrane that blocks sodium between the two electrodes, so we could keep it out of the side that’s desalinated.”