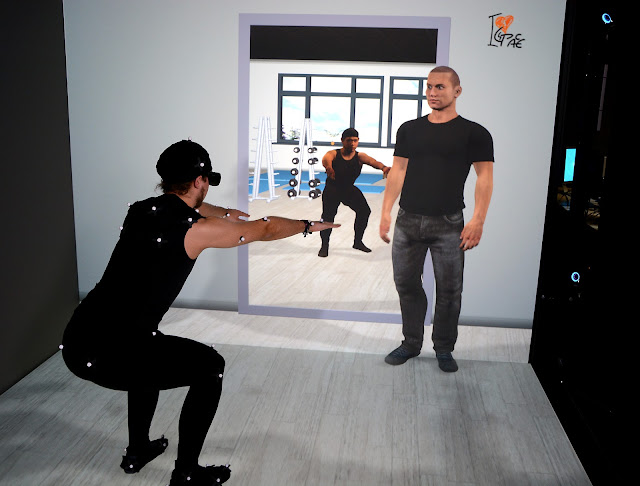 (February 19, 2016)  Cluster of Excellence CITEC is developing a system to support athletes and patients in physical rehabilitation

A new system in a virtual training room is helping users practice and improve sports exercises and other motor activities: six research groups from the Cluster of Excellence Cognitive Interaction Technology (CITEC) at Bielefeld University are working on the ICSPACE project to develop this virtual coaching space. CITEC is funding this large-scale research project with 1.6 million Euro and it will run until 2017. During a project presentation the researchers showcased what their system is capable of. Using the example of a squat exercise, they presented the new technology, which will help not only athletes, but also physical rehabilitation patients learn movement exercises and correct their mistakes. In a new “research_TV” report from Bielefeld University, the coordinators of the project also explain how their new system works.

CITEC creates new technologies that provide people with intuitive assistance. In order to investigate how such assistance could work when it comes to learning and coaching physical exercises, researchers at the Cluster of Excellence CITEC developed the intelligent coaching space (ICSPACE) system. Here, the researchers are using a construction with two projection walls (front and floor) to simulate a computer-generated virtual environment.  Participants wear a pair of stereoscopic glasses, similar to 3-D glasses worn at the movie theater. The main difference here is that the image is precisely adjusted based on the position and viewing direction of the user, which creates the impression of really being in the gym and the coach standing right in front of you. Each test subject is outfitted with reflective markers that are tracked by infrared cameras. This allows the system to precisely track the person’s movements.