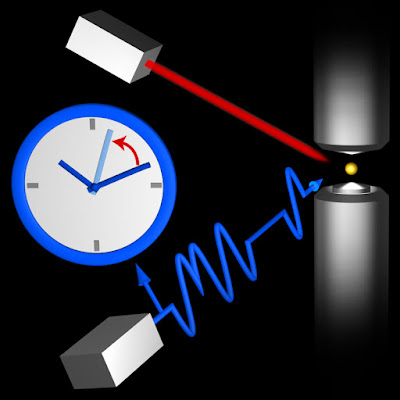 Schematic representation: Measuring the influence of thermal ambient radiation
on the frequency of the trapped ion: the "clock laser" (blue beam) excites the trapped
ion (yellow) with a special pulse sequence. The resonance frequency of the ion is
influenced by infrared radiation (here by an infrared laser, red beam).
This can be measured by means of the clock laser. (Fig.: PTB)

(February 10, 2016)  Scientists from the Physikalisch-Technische Bundesanstalt (PTB) reduce the measurement uncertainty of their ytterbium clock down to 3 ∙ 10–18

Atomic clock experts from the Physikalisch-Technische Bundesanstalt (PTB) are the first research group in the world to have built an optical single-ion clock which attains an accuracy which had only been predicted theoretically so far. As early as 1981, Hans Dehmelt, who was to be awarded a Nobel prize later, had already developed the basic notions of how to use an ion kept in a high-frequency trap to build a clock which could attain the – then unbelievably low – relative measurement uncertainty in the range of 10–18. Ever since, an increasing number of research groups worldwide have been trying to achieve this with optical atomic clocks (either based on single trapped ions or on many neutral atoms). The PTB scientists are the first to have reached the finishing line using a single-ion clock. Their optical ytterbium clock achieved a relative systematic measurement uncertainty of 3 ∙ 10–18. The results have been published in the current issue of the scientific journal "Physical Review Letters". 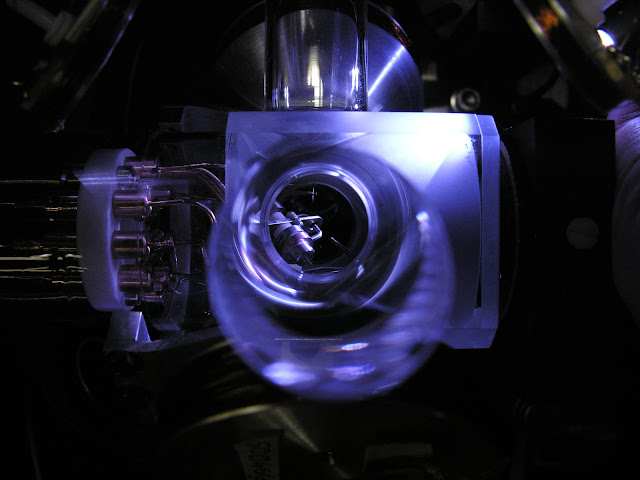 The definition and realization of the SI unit of time, the second, is currently based on cesium atomic clocks. Their "pendulum" consists of atoms which are excited into resonance by microwave radiation (1010 Hz). It is regarded as certain that a future redefinition of the SI second will be based on an optical atomic clock. These have a considerably higher excitation frequency (1014 to 1015 Hz), which makes them much more stable and more accurate than cesium clocks.

The accuracy now achieved with the ytterbium clock is approximately a hundred times better than that of the best cesium clocks. To develop their clock, the researchers from PTB exploited particular physical properties of Yb+. This ion has two reference transitions which can be used for an optical clock. One of these transitions is based on the excitation into the so-called "F state" which, due to its extremely long natural lifetime (approx. 6 years), provides exceptionally narrow resonance. In addition, due to the particular electronic structure of the F state, the shifts of the resonance frequency caused by electric and magnetic fields are exceptionally small. The other reference transition (into the D3/2 state) exhibits higher frequency shifts and is therefore used as a sensitive "sensor" to optimize and control the operating conditions. Another advantage is that the wavelengths of the lasers required to prepare and excite Yb+ are in a range in which reliable and affordable semiconductor lasers can be used.