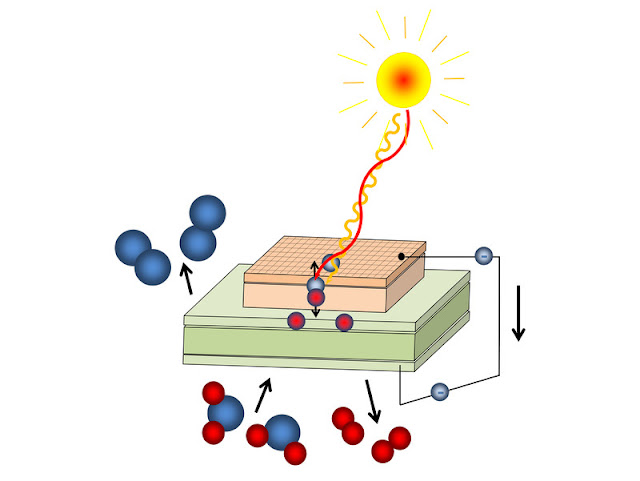 (February 22, 2016)  A photo-electrochemical cell has been developed at TU Wien (Vienna). It can chemically store the energy of ultraviolet light even at high temperatures.

Nature shows us how it is done: Plants can absorb sunlight and store its energy chemically. Imitating this on large industrial scale, however, is difficult. Photovoltaics convert sunlight to electricity, but at high temperatures, the efficiency of solar cells decreases. Electrical energy can be used to produce hydrogen, which can then be stored – but the energy efficiency of this process is limited.

Scientists at TU Wien (Vienna) have now developed a new concept: By combining  highly specialised new materials, they have managed to combine high temperature photovoltaics with an electrochemical cell. Ultraviolet light can be directly used to pump oxygen ions through a solid oxide electrolyte. The energy of the UV light is stored chemically. In the future, this method could also be used to split water into hydrogen and oxygen.

Special Materials for High Temperatures
As a student at TU Wien, Georg Brunauer  started pondering possible combinations of photovoltaics and electrochemical storage. The feasibility of such a system depends crucially on whether it is able to work at high temperatures. “This would allow us to concentrate sunlight with mirrors and build large-scale plants with a high rate of efficiency”, says Brunauer. Common photovoltaic  cells, however, only work well up to 100°C. In a solar concentrator plant, much higher temperatures would be reached. 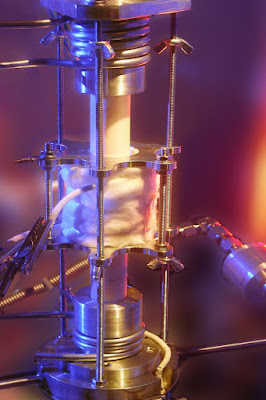 While working on his doctoral thesis, Brunauer managed to put his ideas into practice. The key to success was an unusual choice of materials. Instead of the ordinary silicon based  photovoltaics, special metal oxides - so-called perovskites - were used. By combining several different metal oxides, Brunauer managed to assemble a cell which combines photovoltaics and electrochemistry. Several research partners at TU Wien contributed to the project. Georg Brunauer is a member of Prof. Karl Ponweiser’s research team at the Institute for Energy Systems and Thermodynamics, Prof. Jürgen Fleig’s group (Chemical Technologies and Analytics) and the Institute for Atomic and Subatomic physics were involved as well.

Creating Voltage and Pumping Ions
“Our cell consists of two different parts – a photoelectric part on top and an electrochemical part below”, says Georg Brunauer. “In the upper layer, ultraviolet light creates free charge carriers, just like in a standard solar cell.” The electrons in this layer are immediately removed and travel to the bottom layer of the electrochemical cell. Once there, these electrons are used to ionize oxygen to negative oxygen ions, which can then travel through a membrane in the electrochemical part of the cell.

“This is the crucial photoelectrochemical step, which we hope will lead to the possibility of splitting water and producing hydrogen”, says Brunauer. In its first evolution step, the cell works as a UV-light driven oxygen pump. It yields an open-current voltage of up to 920 millivolts at a temperature of 400°C.