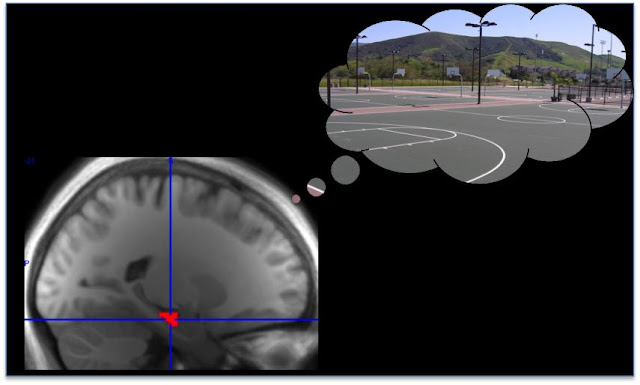 UC Davis neuroscientists were able to able to identify a signal
associated with a rewarding memory, in this case related to a photo of
a basketball court. Credit: Charan Ranganath

(February 12, 2016)  Why do we remember some events, places and things, but not others? Our brains prioritize rewarding memories over others, and reinforce them by replaying them when we are at rest, according to new research from the University of California, Davis, Center for Neuroscience, published Feb. 11 in the journal Neuron.

“Rewards help you remember things, because you want future rewards,” said Professor Charan Ranganath, a UC Davis neuroscientist and senior author on the paper. “The brain prioritizes memories that are going to be useful for future decisions.”

It’s estimated that we only retain detailed memories for a small proportion of the events of each day, Ranganath said. People with very detailed memories become overwhelmed with information. So if the brain is going to filter information and decide what to remember, it makes sense to save those memories that might be most important for obtaining rewards in the future.

Ranganath and postdoctoral researcher Matthias Gruber put this to the test by scanning the brains of volunteers by functional magnetic resonance imaging as they answered simple yes-no questions on short series of objects — for example, “do these objects weigh more than a basketball?” Each series of objects was shown on a background image for context, and depending on the context, the volunteers were told they would either get a large (dollars) or small (cents) reward for giving correct answers. At the end of a series, participants were told how much money they just won.