(February 17, 2016)  The research group of Professor Hideo Ohno and Associate Professor Shunsuke Fukami of Tohoku University has studied the control of magnetization using a current applied to heterostructures comprising an antiferromagnet. They found that the current gives rise to a flow of electron spin in the antiferromagnet, which induces magnetization switching in a neighboring ferromagnet.

The obtained results shed light on a new physics of antiferromagnet and also open various pathways toward ultralow-power integrated circuits and other novel applications such as neuromorphic computing.

Spintronics devices that can store information via the magnetization direction under no power supply, are expected to realize ultralow-power integrated circuits.  A key issue for the application is how to achieve a fast and reliable magnetization switching with low power consumption. 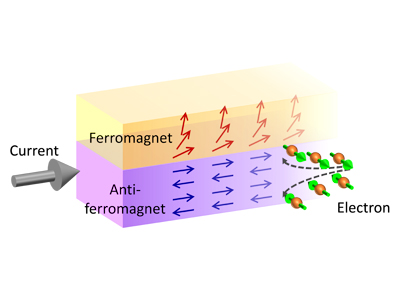 Recently, a switching scheme utilizing the flow of electron spin, the so-called spin current, originating from the spin-orbit interaction, has attracted a great deal of attention as a new method to achieve fast and reliable control of magnetization. This scheme has been observed in heterostructures typically consisting of ferromagnet and nonmagnetic heavy metal layer and is called the spin-orbit torque induced magnetization switching. 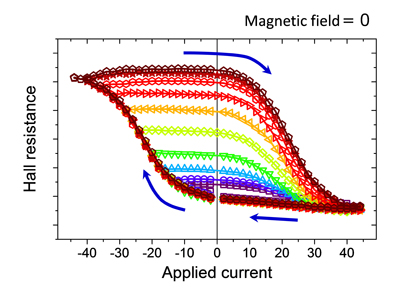