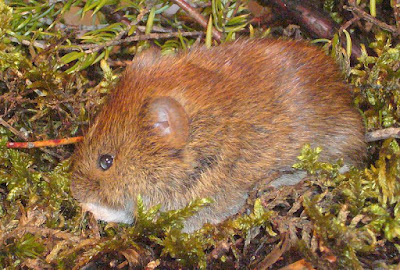 (February 10, 2016) Female voles are more susceptible to cataracts than males

This year marks 30 years since the Chernobyl nuclear accident. Vast amounts of radioactive particles spread over large areas in Europe. These particles, mostly Cesium-137, cause a low but long-term exposure to ionizing radiation in animals and plants.

This chronic exposure has been shown to decrease the abundances of many animal species both after the Chernobyl and later Fukushima nuclear accidents. Damage caused by acute exposure to high radiation doses have been demonstrated in numerous laboratory studies, but effects of chronic exposure to low radiation in the wild remain largely unknown.

New research now suggests that chronic exposure to low radiation can cause damage to the eyes of wild animals. This is shown in an international study led by researchers Philipp Lehmann and Tapio Mappes from the University of Jyväskylä, Finland, which recently was published in the journal Scientific Reports.

In the study higher frequencies of cataracts were found in the lenses of bank voles which had lived in areas where background radiation levels were elevated compared to areas with natural radiation levels. Cataract frequency increased with age in the voles, similarly as in humans generally. In addition, the effects of aging intensified as a result of elevated radiation.

Interestingly the effect of radiation was significant only in female voles. Also in humans there are indications for high radiosensitivity of lenses. Persons with occupational exposure to radiation, such as radiology nurses, nuclear power plant workers and airline pilots have increased risk of cataract, but potential gender differences in radiosensitivity should be further studied.