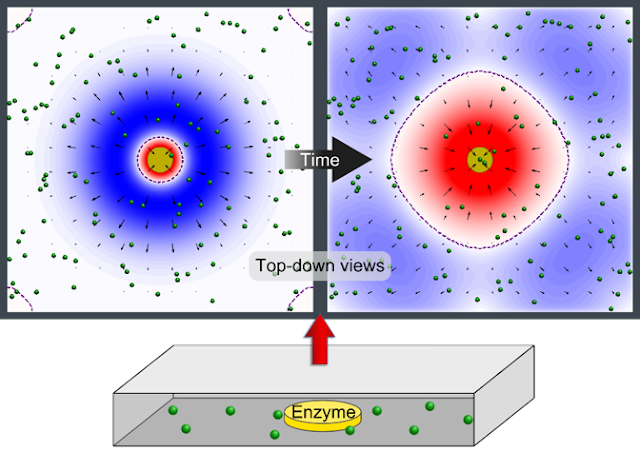 This image illustrates pumping in two directions at once with an enzyme patch. A patch of enzymes
immobilized on a surface acts as a fluid pump. The fluid, and the small particles (green spheres)
carried by the fluid, can simultaneously be pumped away from the patch (blue) in some parts of the
chamber and toward the patch (red) in other locations. This behavior changes over time and is due
to the changes in fluid density that the reaction produces. Image: University of Pittsburgh

(February 25, 2016)  A new way to use the chemical reactions of certain enzymes to trigger self-powered mechanical movement has been developed by a team of researchers at Penn State University and the University of Pittsburgh. A paper describing the team's research, titled "Convective flow reversal in self-powered enzyme micropumps," is published this week in the journal Proceedings of the National Academy of Sciences.

"These pumps provide precise control over flow rate without the aid of an external power source and are capable of turning on in response to specific chemicals in solution," said Ayusman Sen, Distinguished Professor of Chemistry at Penn State. "They also can remain viable and capable of turning on even after prolonged storage." Sen and Penn State graduate student Isamar Ortiz did the research team's experiments, which reveal that "simple reactions triggered by enzymes can be used to combine sensing and fluid pumping into single non-mechanical, self-powered, nano/microscale pumps that precisely control flow rate, and that turn on in response to specific stimuli," said Sen, who also made the initial discovery of enzyme pumps.

Potential uses of the self-powered enzyme micropumps include detecting substances, moving particles to build small structures, and delivering medications. "One potential use is the release of insulin to a diabetes patient from a reservoir at a rate proportional to the concentration of glucose in the person's blood," Sen said. "Another example is an enzyme pump that is triggered by nerve toxins to release an antidote agent to decontaminate and treat an exposed person. Also, because enzyme pumps can pump particles suspended in a fluid, it also should be possible to use them to assemble or disassemble small structures in specific locations by directional pumping."