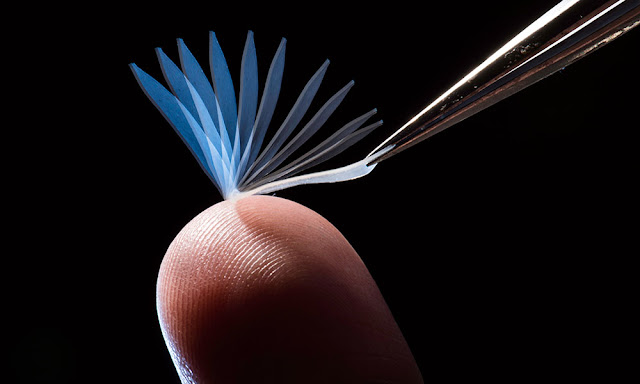 A time-lapse photo of a new shape-memory polymer reverting to its original shape
after being exposed to body temperature. (University of Rochester photo / J. Adam Fenster)

Polymers that visibly change shape when exposed to temperature changes are nothing new. But a research team led by Chemical Engineering Professor Mitch Anthamatten at the University of Rochester created a material that undergoes a shape change that can be triggered by body heat alone, opening the door for new medical and other applications.

The material developed by Anthamatten and graduate student Yuan Meng is a type of shape-memory polymer, which can be programmed to retain a temporary shape until it is triggered—typically by heat—to return to its original shape. 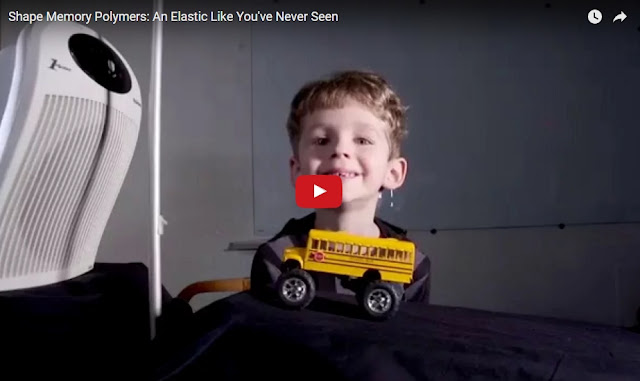 The findings are being published this week in the Journal of Polymer Science Part B: Polymer Physics.

“Tuning the trigger temperature is only one part of the story,” said Anthamatten. “We also engineered these materials to store large amount of elastic energy, enabling them to perform more mechanical work during their shape recovery”

The key to developing the new polymer was figuring out how to control crystallization that occurs when the material is cooled or stretched. As the material is deformed, polymer chains are locally stretched, and small segments of the polymer align in the same direction in small areas—or domains—called crystallites, which fix the material into a temporarily deformed shape. As the number of crystallites grows, the polymer shape becomes more and more stable, making it increasingly difficult for the material to revert back to its initial—or “permanent”—shape. 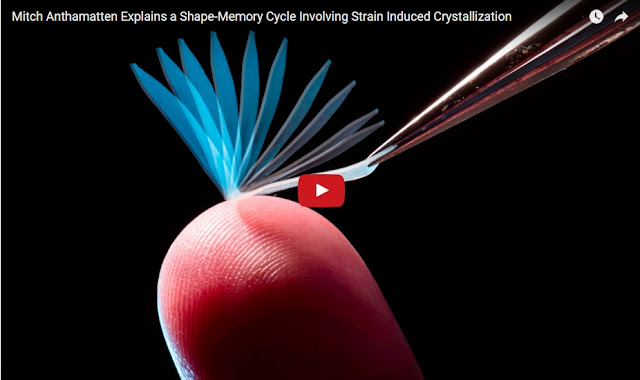 “Our shape-memory polymer is like a rubber band that can lock itself into a new shape when stretched,” said
Anthamatten. “But a simple touch causes it to recoil back to its original shape.”

The ability to tune the trigger temperature was achieved by including molecular linkers to connect the individual polymer strands. Anthamatten’s group discovered that linkers inhibit—but don’t stop—crystallization when the material is stretched. By altering the number and types of linkers used, as well as how they’re distributed throughout the polymer network, the Rochester researchers were able to adjust the material’s stability and precisely set the melting point at which the shape change is triggered.

Heating the new polymer to temperatures near 35 °C, just below the body temperature causes the crystallites to break apart and the material to revert to its permanent shape.