Schematic illustration of the experimental strategy: Double stranded DNA bundles (gray) form
tetrahedral cages. Single stranded DNA strands on the edges (green) and vertices (red) match up with
complementary strands on gold nanoparticles. This results in a single gold particle being trapped
inside each tetrahedral cage, and the cages binding together by tethered gold nanoparticles at each
vertex. The result is a crystalline nanoparticle lattice that mimics the long-range order of crystalline
diamond. The images below the schematic are (left to right): a reconstructed cryo-EM density map of
the tetrahedron, a caged particle shown in a negative-staining TEM image, and a diamond superlattice
shown at high magnification with cryo-STEM.

(February 5, 2016)  DNA scaffolds cage and coax nanoparticles into position to form crystalline arrangements that mimic the atomic structure of diamond

Using bundled strands of DNA to build Tinkertoy-like tetrahedral cages, scientists at the U.S. Department of Energy's Brookhaven National Laboratory have devised a way to trap and arrange nanoparticles in a way that mimics the crystalline structure of diamond. The achievement of this complex yet elegant arrangement, as described in a paper published February 5, 2016, in Science, may open a path to new materials that take advantage of the optical and mechanical properties of this crystalline structure for applications such as optical transistors, color-changing materials, and lightweight yet tough materials.

"We solved a 25-year challenge in building diamond lattices in a rational way via self-assembly," said Oleg Gang, a physicist who led this research at the Center for Functional Nanomaterials (CFN) at Brookhaven Lab in collaboration with scientists from Stony Brook University, Wesleyan University, and Nagoya University in Japan. 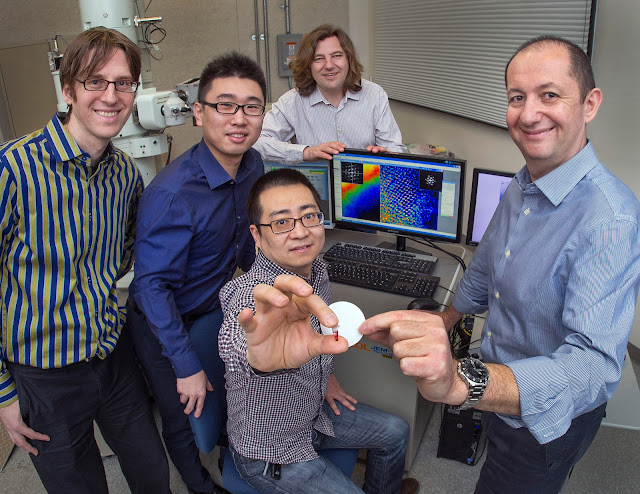 The scientists employed a technique developed by Gang that uses fabricated DNA as a building material to organize nanoparticles into 3D spatial arrangements. They used ropelike bundles of double-helix DNA to create rigid, three-dimensional frames, and added dangling bits of single-stranded DNA to bind particles coated with complementary DNA strands.

"We're using precisely shaped DNA constructs made as a scaffold and single-stranded DNA tethers as a programmable glue that matches up particles according to the pairing mechanism of the genetic code—A binds with T, G binds with C," said Wenyan Liu of the CFN, the lead author on the paper. "These molecular constructs are building blocks for creating crystalline lattices made of nanoparticles."