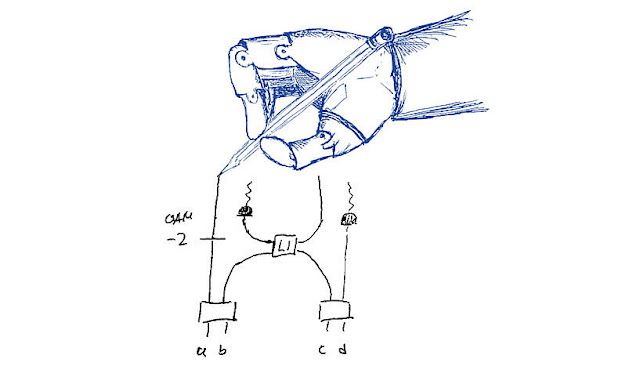 The Algorithm Melvin found out that the most simple realization
can be asymmetric and therefore counterintuitive
(Copyright: Robert Fickler, Universität Wien).

(February 22, 2016)  Algorithm does not work intuitive – just as quantum physics

Quantum physics is counterintuitive. Many of the phenomena in the quantum world do not have a classical analog: In the quantum world, a coin is not either heads or tails – but can have both properties at the same time. For a better understanding of such phenomena, laboratory experiments are indispensable. Quantum physicist Mario Krenn and his colleagues in the group of Anton Zeilinger from the Faculty of Physics at the University of Vienna and the Austrian Academy of Sciences have developed an algorithm which designs new useful quantum experiments. As the computer does not rely on human intuition, it finds novel unfamiliar solutions. The research has just been published in the journal Physical Review Letters.

The idea was developed when the physicists wanted to create new quantum states in the laboratory, but were unable to conceive of methods to do so. “After many unsuccessful attempts to come up with an experimental implementation, we came to the conclusion that our intuition about these phenomena seems to be wrong. We realized that in the end we were just trying random arrangements of quantum building blocks. And that is what a computer can do as well – but thousands of times faster”, explains Mario Krenn, PhD student in Anton Zeilinger’s group and first author research.