Moving electrons around loops with light: A quantum device based on geometry 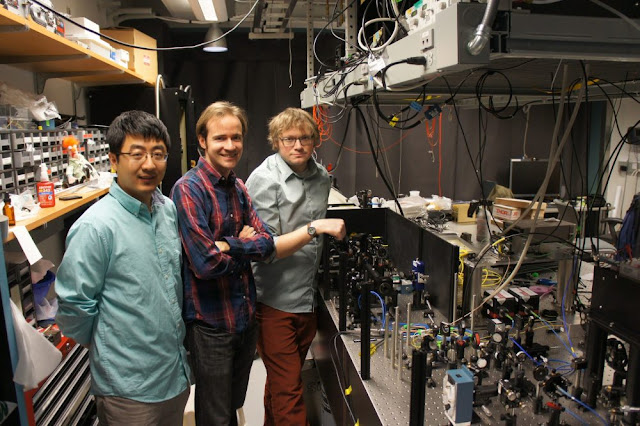 From left: Brian Zhou, Christopher Yale and F. Joseph Heremans, researchers at the
University of Chicago’s Institute for Molecular Engineering, and the optical apparatus
they used to control geometric phases in diamond. Courtesy of Awschalom Group

While a classical bit found in conventional electronics exists only in binary one or zero states, the more resourceful quantum bit, or ‘qubit,’ is represented by a vector, pointing to a simultaneous combination of the one and zero states. To fully implement a qubit, it is necessary to control the direction of this qubit’s vector, which is generally done using fine-tuned and noise-isolated procedures. 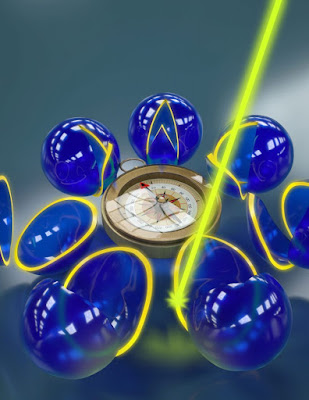 Researchers at the University of Chicago’s Institute for Molecular Engineering and the University of Konstanz have demonstrated the ability to generate a quantum logic operation, or rotation of the qubit, that—surprisingly—is intrinsically resilient to noise as well as to variations in the strength or duration of the control. Their achievement is based on a geometric concept known as the Berry phase and is implemented through entirely optical means within a single electronic spin in diamond.

Their findings were published online Feb. 15, 2016, in Nature Photonics and will appear in the March print issue. “We tend to view quantum operations as very fragile and susceptible to noise, especially when compared to conventional electronics,” remarked David Awschalom, the Liew Family Professor of Molecular Engineering and senior scientist at Argonne National Laboratory, who led the research. “In contrast, our approach shows incredible resilience to external influences and fulfills a key requirement for any practical quantum technology.”