The nanowires, with diameters as small as 200 nanometers (billionths of a meter) and a blend of materials that has also proven effective in next-generation solar cell designs, were shown to produce very bright, stable laser light. Researchers say the excellent performance of these tiny lasers is promising for the field of optoelectronics, which is focused on combining electronics and light to transmit data, among other applications.

Light can carry far more data, far more rapidly than standard electronics—a single fiber in a fiber-optic cable, measuring less than a hair’s width in diameter, can carry tens of thousands of telephone conversations at once, for example. And miniaturizing lasers to the nanoscale could further revolutionize computing by bringing light-speed data transmission to desktop and ultimately handheld computing devices. 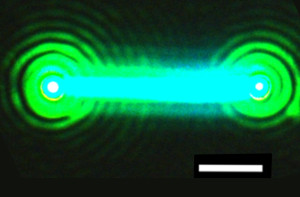 This nanowire, composed of cesium, lead and bromide (CsPbBr3),
emits bright laser light after hit by a pulse from another laser source.
The nanowire laser proved to be very stable, emitting laser light
for over an hour. It also was demonstrated to be broadly tunable across
green and blue wavelengths. The white line is a scale bar that measures 2 microns,
or millionths of an inch. (Credit: Sam Eaton/UC Berkeley)

“What’s amazing is the simplicity of the chemistry here,” said Peidong Yang, a chemist in Berkeley Lab’s Materials Sciences Division who led the research, published Feb. 9 in Proceedings of the National Academy of Sciences. More standard techniques that produce nanowires can require expensive equipment and exotic conditions, such as high temperatures, and can suffer from other shortcomings. 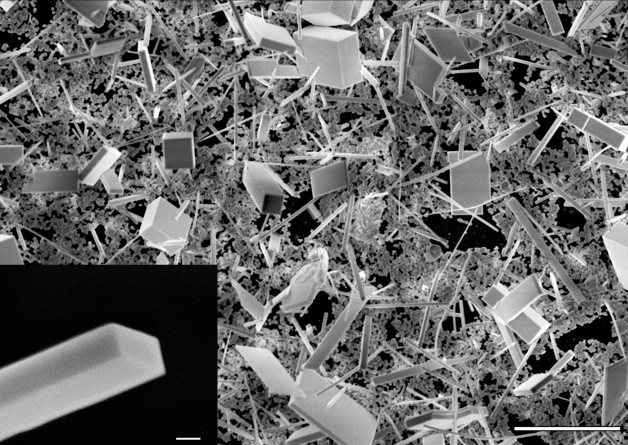 A nanowire construction zone: This scanning electron microscope image shows a collection
of cesium lead bromide (CsPgbBr3) nanowires and nanoplates grown from a chemical-dipping
process. To produce these structures, researchers dipped a thin lead-containing film into
a methanol solution containing cesium, bromine and chlorine heated to about 122 degrees.
The white scale bar at the lower right represents 10 microns. The image at the bottom left
shows the well-formed rectangular end of a nanowire—the white scale bar associated with it
represents 500 nanometers. (Credit: Sam Eaton/UC Berkeley)

The research team developed a simple chemical-dipping solution process to produce a self-assembled blend of nanoscale crystals, plates and wires composed of cesium, lead and bromine (with the chemical formula: CsPbBr3). The same chemical blend, with a molecular architecture composed of cube-like crystal structures, has also proven effective in an emerging wave of new designs for high-efficiency solar cells.

“Most of the earlier work with these types of materials is focused on these solar energy applications,” said Yang, who also holds appointments with UC Berkeley and the Kavli Energy NanoScience Institute at Berkeley Lab and UC Berkeley. “There has been so much progress with these materials in just the past several years—I have a feeling these materials will open a new research frontier for optoelectronics as well,” he said, and in the broader field of photonics, which is focused on using light for a range of applications.