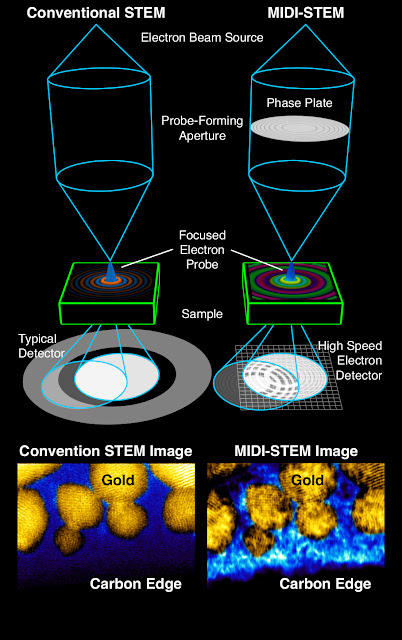 Electrons can extend our view of microscopic objects well beyond what’s possible with visible light—all the way to the atomic scale. A popular method in electron microscopy for looking at tough, resilient materials in atomic detail is called STEM, or scanning transmission electron microscopy, but the highly focused beam of electrons used in STEM can also easily destroy delicate samples.

This is why using electrons to image biological or other organic compounds, such as chemical mixes that include lithium—a light metal that is a popular element in next-generation battery research—requires a very low electron dose.

This animated representation shows a Berkeley Lab-developed technique called
MIDI-STEM (at right) and conventional STEM (at left) that does not use a ringed object
called a phase plate. In MIDI-STEM, an interference pattern (bottom right) introduced by
the phase plate (top right) interacts with the electron beam before it travels through
a sample (the blue wave in the center). As the phase of the sample
(the distance between the peaks and valleys of the blue wave) changes,
the electrons passing through the sample are affected and can be measured
as a pattern (bottom right). (Colin Ophus/Berkeley Lab)

This phase plate modifies the electron beam in a way that allows subtle changes in a material to be measured, even revealing materials that would be invisible in traditional STEM imaging.

Another electron-based method, which researchers use to determine the detailed structure of delicate, frozen biological samples, is called cryo-electron microscopy, or cryo-EM. While single-particle cryo-EM is a powerful tool—it was named as science journal Nature’s 2015 Method of the Year—it typically requires taking an average over many identical samples to be effective. Cryo-EM is generally not useful for studying samples with a mixture of heavy elements (for example, most types of metals) and light elements like oxygen and carbon.