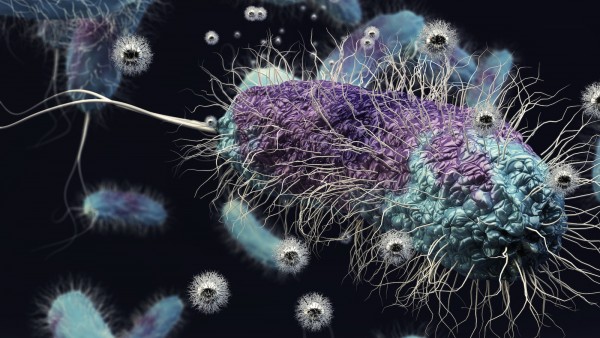 Shewanella oneidensis thrives on metal ions, converting them to metals like iron that serve as
nutrients for other microbes. The bacterium was shown to be harmed by the compound nickel
manganese cobalt oxide, which is produced in nanoparticle form and is poised to become the
dominant material in the lithium ion batteries that will power portable electronics and electric vehicles.
(Illustration by Ella Marushchenko, University of Minnesota)

(January 4, 2016 )  The material at the heart of the lithium ion batteries that power electric vehicles, laptop computers and smartphones has been shown to impair a key soil bacterium, according to new research published online in the journal Chemistry of Materials.

The study by researchers at the University of Wisconsin—Madison and the University of Minnesota is an early signal that the growing use of the new nanoscale materials used in the rechargeable batteries that power portable electronics and electric and hybrid vehicles may have untold environmental consequences.

Researchers led by UW–Madison chemistry Professor Robert J. Hamers explored the effects of the compound nickel manganese cobalt oxide (NMC), an emerging material manufactured in the form of nanoparticles that is being rapidly incorporated into lithium ion battery technology, on the common soil and sediment bacterium Shewanella oneidensis.

“As far as we know, this is the first study that’s looked at the environmental impact of these materials,” says Hamers, who collaborated with the laboratories of University of Minnesota chemist Christy Haynes and UW–Madison soil scientist Joel Pedersen to perform the new work.