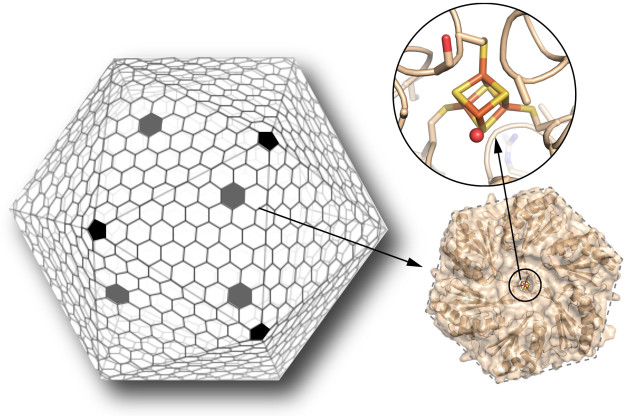 The shell of a bacterial microcompartment (or BMC) is mainly composed of hexagonal proteins, with
pentagonal proteins capping the vertices, similar to a soccer ball (left). Scientists have engineered one
of these hexagonal proteins, normally devoid of any metal center, to bind an iron-sulfur cluster
(orange and yellow sticks, upper right). This cluster can serve as an electron relay to transfer
electrons across the shell. Introducing this new functionality in the shell of a BMC greatly expands
their possibilities as custom-made bio-nanoreactors.
(Credit: Clément Aussignargues/MSU, Cheryl Kerfeld and Markus Sutter/Berkeley Lab)

(February 5, 2016)  Scientists have for the first time reengineered a building block of a geometric nanocompartment that occurs naturally in bacteria. They introduced a metal binding site to its shell that will allow electrons to be transferred to and from the compartment. This provides an entirely new functionality, greatly expanding the potential of nanocompartments to serve as custom-made chemical factories.

Scientists hope to tailor this new use to produce high-value chemical products, such as medicines, on demand.

The sturdy nanocompartments, which are polyhedral shells composed of triangle-shaped sides and resemble 20-sided dice, are formed by hundreds of copies of just three different types of proteins. Their natural counterparts, known as bacterial microcompartments or BMCs, encase a wide variety of enzymes that carry out highly specialized chemistry in bacteria. 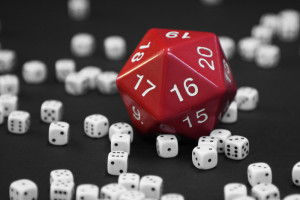 Scientists have reengineered nanoscale polyhedral shells, which have a natural
structure resembling the 20-sided die in this photo, to include a metal
cluster that gives the shells a new function. (Credit: Flickr/CGPsGrey.com)

Researchers at the Department of Energy’s Lawrence Berkeley National Laboratory (Berkeley Lab) devised synthetic shell structures derived from those found in a rod-shaped, ocean-dwelling bacterium, Haliangium ochraceum, and reengineered one of the shell proteins to serve as a scaffold for an iron-sulfur cluster found in many forms of life. The cluster is known as a “cofactor” because it can serve as a helper molecule in biochemical reactions.

BMC-based shells are tiny, durable and naturally self-assemble and self-repair, which makes them better-suited for a range of applications than completely synthetic nanostructures. 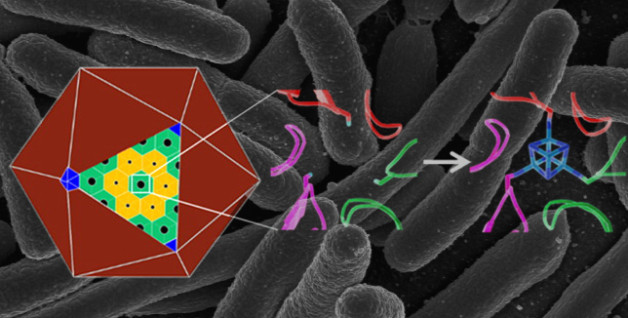 “This is the first time anyone has introduced functionality into a shell. We thought the most important functionality to introduce was the ability to transfer electrons into or out of the shell,” said Cheryl Kerfeld, a structural biologist at Berkeley Lab and corresponding author in this study. Kerfeld’s research group focuses on BMCs. Kerfeld holds joint appointments with Berkeley Lab’s Molecular Biophysics and Integrated Bioimaging (MBIB) Division, UC Berkeley and the MSU-DOE Plant Research Laboratory at Michigan State University (MSU).

“That greatly enhances the versatility of the types of chemistries you can encapsulate in the shell and the spectrum of products to be produced,” she said. “Typically, the shells are thought of as simply passive barriers.”