Cells that show where things are going 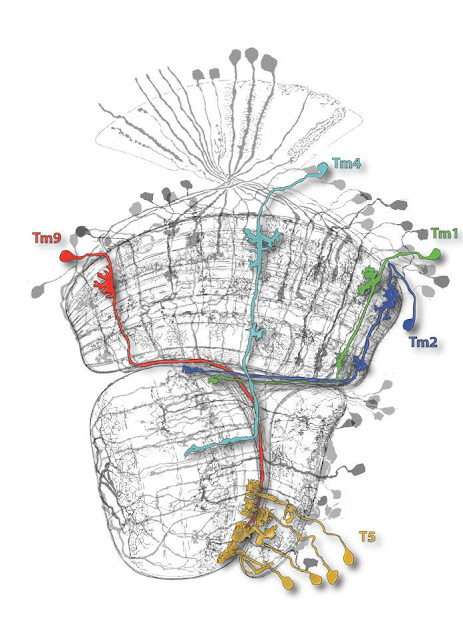 Clarity in the cellular thicket. Four classes of nerve cell (Tm9, 4, 1 and 2)
are instrumental in calculating directionally selective signals in T5 neurons (yellow).
© MPI of Neurobiology

The ability to see the direction in which something is moving is vital for survival. Only in this way is it possible to avoid predators, capture prey or, as humans in a modern world, cross a road safely. However, the direction of motion is not explicitly represented at the level of the photoreceptors but rather must be calculated by subsequent layers of nerve cells. Scientists from the Max Planck Institute of Neurobiology in Martinsried have now discovered that, in fruit flies, four classes of nerve cell are involved in calculating directionally selective signals. This is strikingly different from mathematical models of motion detection discussed in the literature so far.

When crossing a road, it’s advantageous to know the direction in which nearby cars are moving. However, the individual light sensitive cells in the eye only signal local changes in brightness, whether an image point becomes brighter or darker. The direction of motion is detected in a downstream neuronal network.

Alexander Borst and his team at the Max Planck Institute of Neurobiology have unravelled cell by cell how the brain calculates motion from light changes. Their model is the fruit fly, a master in motion vision, possessing a relatively small brain. Although there are more than 50,000 nerve cells in the area of the fruit fly brain responsible for motion vision, the researchers believe that the network is “simple” enough to allow them to understand the circuitry at the cellular level. In previous studies, they have shown that in flies, similar to vertebrates, motion is detected in two parallel pathways, one for moving bright edges (ON-pathway) and one for moving dark edges (OFF-pathway).