Stretchable electronics that quadruple in length 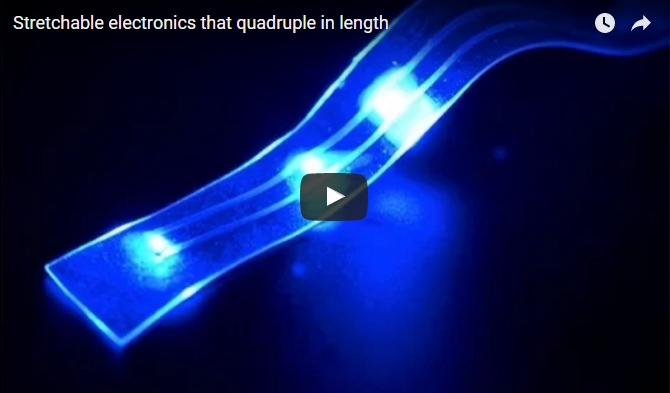 (February 29, 2016)  EPFL researchers have developed conductive tracks that can be bent and stretched up to four times their original length. They could be used in artificial skin, connected clothing and on-body sensors.

Conductive tracks are usually hard printed on a board. But those recently developed at EPFL are altogether different: they are almost as flexible as rubber and can be stretched up to four times their original length and in all directions. And they can be stretched a million times without cracking or interrupting their conductivity. The invention is described in an article published today in the journal Advanced Materials.

Both solid and flexible, this new metallic and partially liquid film offers a wide range of possible applications. It could be used to make circuits that can be twisted and stretched – ideal for artificial skin on prosthetics or robotic machines. It could also be integrated into fabric and used in connected clothing. And because it follows the shape and movements of the human body, it could be used for sensors designed to monitor particular biological functions.

“We can come up with all sorts of uses, in forms that are complex, moving or that change over time,” said Hadrien Michaud, a PhD student at the Laboratory for Soft Bioelectronic Interfaces (LSBI) and one of the study authors.

Extensive research has gone into developing an elastic electronic circuit. It is a real challenge, as the components traditionally used to make circuits are rigid. Applying liquid metal to a thin film in polymer supports with elastic properties naturally seems like a promising approach.

Owing to the high surface tension of some of these liquid metals, experiments conducted so far have only produced relatively thick structures. “Using the deposition and structuring methods that we developed, it’s possible to make tracks that are very narrow – several hundredths of a nanometer thick – and very reliable,” said Stéphanie Lacour, holder of the Bertarelli Foundation Chair in Neuroprosthetic Technology and who runs the lab.