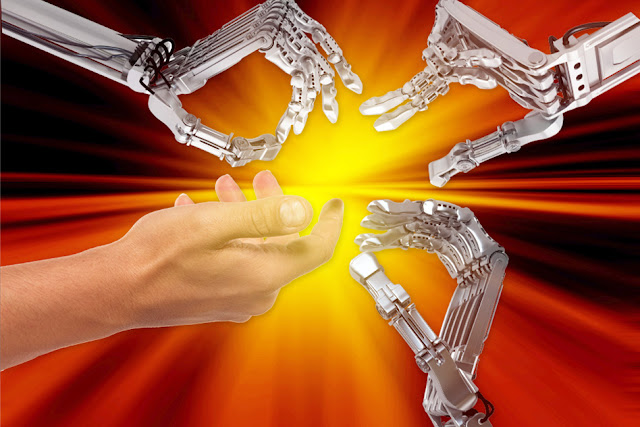 Communication system could make it easier to design systems that enable
humans and robots to work together in emergency-response teams.
Image: Jose-Luis Olivares/MIT

Computers, of course, have no trouble filing this information away until they need it. But such a barrage of data would drive a human being crazy.

At the annual meeting of the Association for the Advancement of Artificial Intelligence last weekend, researchers at MIT’s Computer Science and Artificial Intelligence Laboratory (CSAIL) presented a new way of modeling robot collaboration that reduces the need for communication by 60 percent. They believe that their model could make it easier to design systems that enable humans and robots to work together — in, for example, emergency-response teams.

“We haven’t implemented it yet in human-robot teams,” says Julie Shah, an associate professor of aeronautics and astronautics and one of the paper’s two authors. “But it’s very exciting, because you can imagine: You’ve just reduced the number of communications by 60 percent, and presumably those other communications weren’t really necessary toward the person achieving their part of the task in that team.”

The work could have also have implications for multirobot collaborations that don’t involve humans. Communication consumes some power, which is always a consideration in battery-powered devices, but in some circumstances, the cost of processing new information could be a much more severe resource drain.

In a multiagent system — the computer science term for any collaboration among autonomous agents, electronic or otherwise — each agent must maintain a model of the current state of the world, as well as a model of what each of the other agents takes to be the state of the world. These days, agents are also expected to factor in the probabilities that their models are accurate. On the basis of those probabilities, they have to decide whether or not to modify their behaviors.