The Key to Mass-Producing Nanomaterials 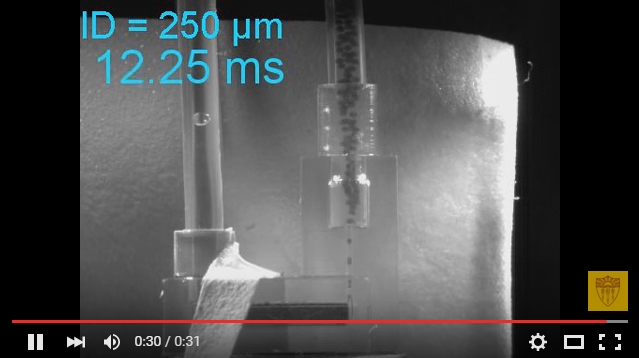 Video: Nanoparticles form in a 3D-printed microfluidic channel. Each droplet shown here
is about 250 micrometers in diameter, and contains billions of platinum nanoparticles.
https://youtu.be/K5rFL4MIfac (Courtesy of Richard Brutchey and Noah Malmstadt)

(February 24, 2016)  Researchers create a system that can scale-up production of the smallest – but among the most useful – materials of this century

Nanoparticles – tiny particles 100,000 times smaller than the width of a strand of hair – can be found in everything from drug delivery formulations to pollution controls on cars to HD TV sets. With special properties derived from their tiny size and subsequently increased surface area, they’re critical to industry and scientific research.

Now, researchers at USC have created a new way to manufacture nanoparticles that will transform the process from a painstaking, batch-by-batch drudgery into a large-scale, automated assembly line.

The method, developed by a team led by Noah Malmstadt of the USC Viterbi School of Engineering and Richard Brutchey of the USC Dornsife College of Letters, Arts and Sciences, was published in Nature Communications on Feb. 23. 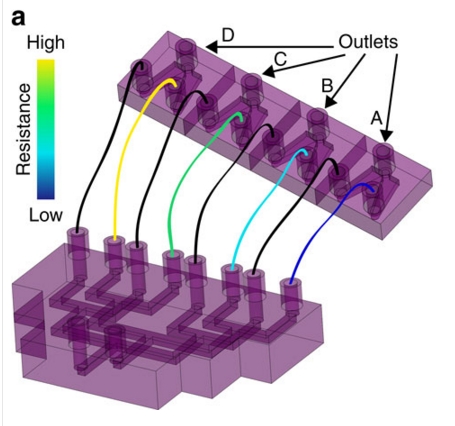 Schematic of the parallel network assembled by connecting a distribution
manifold to four droplet generators. The continuous phase was linked using
low resistance jumper tubing (ID=762 μm) and the dispersed phase was
linked using various lengths of tubing (ID=127 μm) to create a gradient
of resistances across the four branches. (Nature.com)

Consider, for example, gold nanoparticles. They have been shown to be able to easily penetrate cell membranes without causing any damage – an unusual feat, given that most penetrations of cell membranes by foreign objects can damage or kill the cell. Their ability to slip through the cell’s membrane makes gold nanoparticles ideal delivery devices for medications to healthy cells, or fatal doses of radiation to cancer cells.