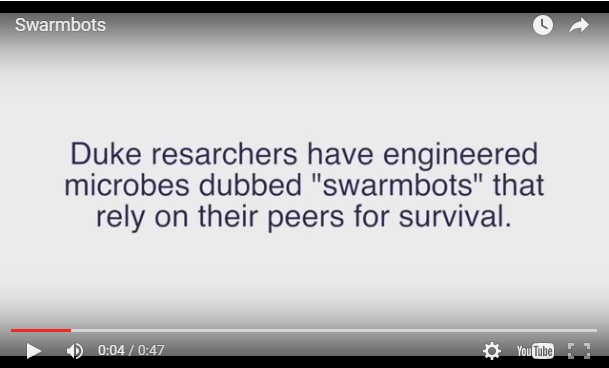 (February 29, 2016)  Duke University bioengineers design cells that die if they leave the confines of their capsule

Duke University researchers have engineered microbes that can’t run away from home; those that do will quickly die without protective proteins produced by their peers.

Dubbed “swarmbots” for their ability to survive in a crowd, the system could be used as a safeguard to stop genetically modified organisms from escaping into the surrounding environment. The approach could also be used to reliably program colonies of bacteria to respond to changes in their surrounding environment, such as releasing specific molecules on cue.

The system is described online February 29, 2016, in Molecular Systems Biology.

“Safety has always been a concern when modifying bacteria for medical applications because of the danger of uncontrolled proliferation,” said Lingchong You, the Paul Ruffin Scarborough Associate Professor of Engineering at Duke University.

“Other labs have addressed this issue by making cells rely on unnatural amino acids for survival or by introducing a ‘kill switch’ that is activated by some chemical,” You said. “Ours is the first example that uses collective survival as a way of intrinsically realizing this safeguard.”

In the experiment, You and his colleagues engineered a non-pathogenic strain of E. coli to produce a chemical called AHL. They also modified the cells so that, in high enough concentrations, AHL causes them to produce an antidote to antibiotics. When the population of E. coli is dense enough, the antidote keeps them alive, even in the presence of antibiotics that would otherwise kill them.

The researchers then confined a sufficiently large number of the bacteria to a capsule and bathed it in antibiotics. As long as the E. coli remained inside their container where their density was high, they all survived. But if individual bacteria escaped, they were quickly killed off by the antibiotic.