Another Milestone in Hybrid Artificial Photosynthesis

(August 25, 2015)  A team of researchers at the U.S. Department of Energy (DOE)’s Lawrence Berkeley National Laboratory (Berkeley Lab) developing a bioinorganic hybrid approach to artificial photosynthesis have achieved another milestone. Having generated quite a buzz with their hybrid system of semiconducting nanowires and bacteria that used electrons to synthesize carbon dioxide into acetate, the team has now developed a hybrid system that produces renewable molecular hydrogen and uses it to synthesize carbon dioxide into methane, the primary constituent of natural gas.

“This study represents another key breakthrough in solar-to-chemical energy conversion efficiency and artificial photosynthesis,” says Peidong Yang, a chemist with Berkeley Lab’s Materials Sciences Division and one of the leaders of this study. “By generating renewable hydrogen and feeding it to microbes for the production of methane, we can now expect an electrical-to-chemical efficiency of better than 50 percent and a solar-to-chemical energy conversion efficiency of 10-percent if our system is coupled with state-of-art solar panel and electrolyzer.” 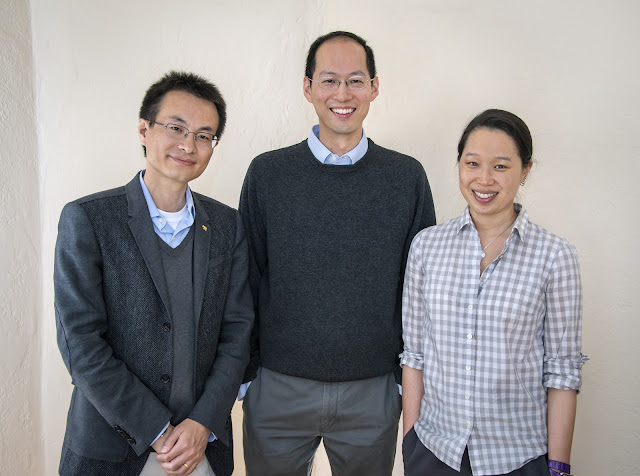 (From left) Peidong Yang, Christopher Chang and Michelle Chang led the development
of an artificial photosynthesis system that can convert CO2 into valuable chemical
products using only water and sunlight. (Photo by Roy Kaltschmidt)

Yang, who also holds appointments with UC Berkeley and the Kavli Energy NanoScience Institute (Kavli-ENSI) at Berkeley, is one of three corresponding authors of a paper describing this research in the Proceedings of the National Academy of Sciences (PNAS). The paper is titled “A hybrid bioinorganic approach to solar-to-chemical conversion.” The other corresponding authors are Michelle Chang and Christopher Chang. Both also hold joint appointments with Berkeley Lab and UC Berkeley. In addition, Chris Chang is a Howard Hughes Medical Institute (HHMI) investigator. (See below for a full list of the paper’s authors.)

Photosynthesis is the process by which nature harvests the energy in sunlight and uses it to synthesize carbohydrates from carbon dioxide and water. Carbohyrates are biomolecules that store the chemical energy used by living cells. In the original hybrid artificial photosynthesis system developed by the Berkeley Lab team, an array of silicon and titanium oxide nanowires collected solar energy and delivered electrons to microbes which used them to reduce carbon dioxide into a variety of value-added chemical products. In the new system, solar energy is used to split the water molecule into molecular oxygen and hydrogen. The hydrogen is then transported to microbes that use it to reduce carbon dioxide into one specific chemical product, methane. 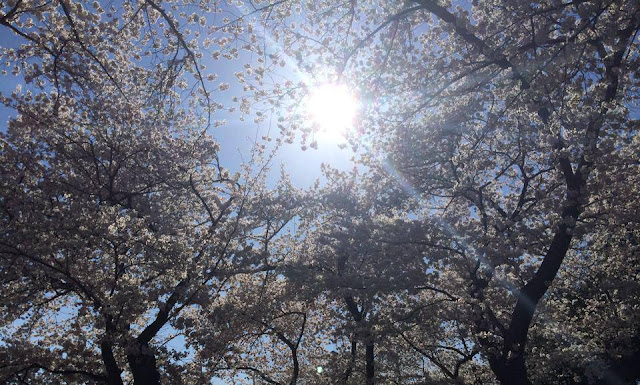 A major advance in artificial photosynthesis poses win/win for the environment
– removing CO2 from the atmosphere and using it for green chemistry,
including renewable fuel production. (Photo by Caitlin Givens)

“In our latest work, we’ve demonstrated two key advances,” says Chris Chang. “First, our use of renewable hydrogen for carbon dioxide fixation opens up the possibility of using hydrogen that comes from any sustainable energy source, including wind, hydrothermal and nuclear. Second, having demonstrated one promising organism for using renewable hydrogen, we can now, through synthetic biology, expand to other organisms and other value-added chemical products.”

The concept in the two studies is essentially the same – a membrane of semiconductor nanowires that can harness solar energy is populated with bacterium that can feed off this energy and use it to produce a targeted carbon-based chemical. In the new study, the membrane consisted of indium phosphide photocathodes and titanium dioxide photoanodes. Whereas in the first study, the team worked with Sporomusa ovata, an anaerobic bacterium that readily accepts electrons from the surrounding environment to reduce carbon dioxide, in the new study the team populated the membrane with Methanosarcina barkeri, an anaerobic archaeon that reduces carbon dioxide using hydrogen rather than electrons.