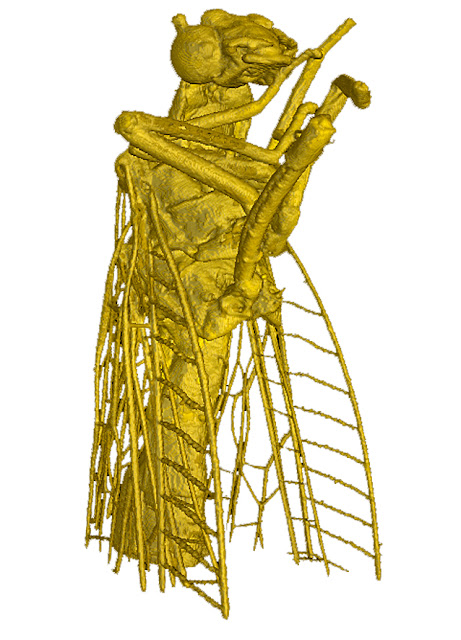 The world’s first image of a fly taken with the help of an all-laser-based X-ray tomography
imaging method. It consists of around 1500 individual images. Even extremely fine
structures appear in three-dimensional detail. These would remain invisible
in a conventional X-ray image. Image: Karsch/Pfeiffer

Physicists from Ludwig-Maximilians-Universität, the Max Planck Institute of Quantum Optics and the TU München have developed a method using laser-generated X-rays and phase-contrast X-ray tomography to produce three-dimensional images of soft tissue structures in organisms.

(August 14, 2015)  With laser light, physicists in Munich have built a miniature X-ray source. In so doing, the researchers from the Laboratory of Attosecond Physics of the Max Planck Institute of Quantum Optics and the Technische Universität München (TUM) captured three-dimensional images of ultrafine structures in the body of a living organism for the first time with the help of laser-generated X-rays. Using light-generated radiation combined with phase-contrast X-ray tomography, the scientists visualized ultrafine details of a fly measuring just a few millimeters. Until now, such radiation could only be produced in expensive ring accelerators measuring several kilometers in diameter. By contrast, the laser-driven system in combination with phase-contrast X-ray tomography only requires a university laboratory to view soft tissues. The new imaging method could make future medical applications more cost-effective and space-efficient than is possible with today’s technologies.

When the physicists Prof. Stefan Karsch and Prof. Franz Pfeiffer illuminate a tiny fly with X-rays, the resulting image captures even the finest hairs on the wings of the insect. The experiment is a pioneering achievement. For the first time, scientists coupled their technique for generating X-rays from laser pulses with phase-contrast X-ray tomography to visualize tissues in organisms. The result is a three-dimensional view of the insect in unprecedented detail.

The X-rays required were generated by electrons that were accelerated to nearly the speed of light over a distance of approximately one centimeter by laser pulses lasting around 25 femtoseconds. A femtosecond is one millionth of a billionth of a second. The laser pulses have a power of approximately 80 terawatts (80 x 1012 watts). By way of comparison: an atomic power plant generates 1,500 megawatts (1.5 x 109 Watt).