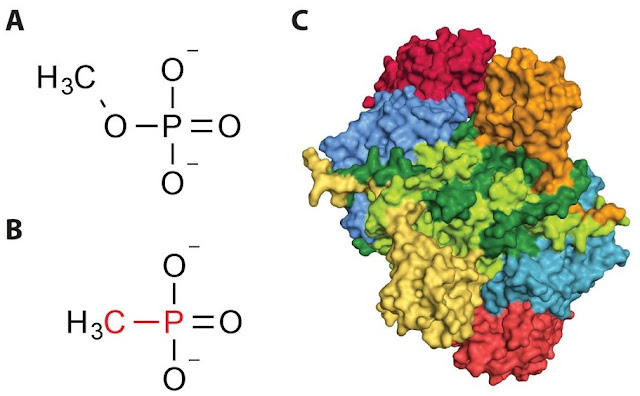 (August 18, 2015)  Bacteria exhibit extreme adaptability, which makes them capable of surviving in the most inhospitable conditions. New research results produced by Danish and British researchers now reveal the molecular details behind one of the secret weapons used by bacteria in their battle to survive under very nutrient-poor and even toxic conditions.

All living things need phosphate to grow, which is why several hundred million tons of phosphate fertilisers are used every year in agriculture throughout the world. The nutrient content is so low in many parts of the world’s oceans that all growth comes to a halt, and bacteria have therefore developed advanced mechanisms to extract phosphate from other substances. These are known as phosphonate compounds, which are produced by many primitive organisms and account for the largest known stock of phosphorus in the marine environment (see figure). Many of these compounds are formed as toxins (antibiotics) as part of the ongoing battle for survival among marine organisms. Several million kilograms of glyphosate (Roundup®) are used as pesticide in agriculture every year, and the accumulation of residues of this phosphonate compound in groundwater has led to growing concern in recent years.

Bacteria capable of converting phosphonate compounds into phosphate to boost their growth have developed an arsenal of fourteen proteins for this purpose, approximately half of which are enzymes required for the chemical transformation of the substances. Five of these enzymes accumulate in the cells in a large complex called the C-P lyase complex, which can catalyse two of the total of five reactions required to use the phosphonate compound for growth.

An international team consisting of researchers from both the Department of Molecular Biology and Genetics, Aarhus University, and the Medical Research Council (MRC) in Cambridge, UK, have now determined the precise molecular structure of the C-P lyase complex, making it possible for the first time to understand how the secret weapon used by bacteria actually works. Using X-ray crystallography and electron microscopy, the researchers were able to achieve extremely detailed insight into the structure of four of the enzymes, as well as the location of the fifth enzyme in the complex.