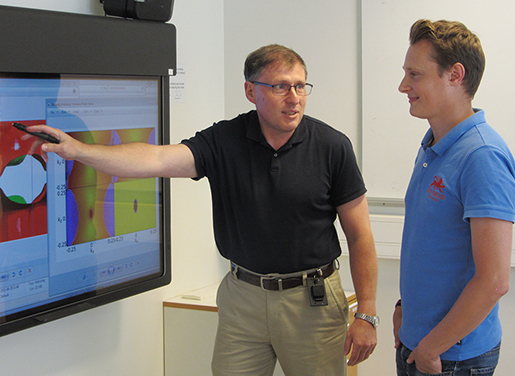 (August 25, 2015)  A research team at Linköping University, together with colleagues in Europe and the United States, has shown that at extremely high pressure even the innermost electrons in the atomic nuclei of the metal osmium begin to interact with each other, a phenomenon never witnessed before. The findings have been published in Nature.

“If we know more about how a matter works, we will be in a better position to develop materials that withstand extreme conditions. In research we're constantly making advances, but in this case we’ve taken a giant leap”, says Igor Abrikosov, professor of theoretical physics at Linköping University, who also leads the theoretical team within the project.

We already know that material properties change at high pressure. As pressure increases, the distance between the atoms decreases, and the outer electrons, the highly mobile valence electrons, interact with each other. It is also the valence electrons that determine the material’s properties. For example under high pressure a shiny electrically conductive metal such as sodium becomes a transparent insulator, and a gas such as oxygen solidifies and conducts electricity. The oxygen can even become superconductive.

But while the valence electrons are highly mobile, the inner electrons continue to move steadily around their atomic nuclei.

The highest pressure achieved thus far is 4 million atmospheres or 400 GPa, which is roughly the pressure at the earth's centre. But thanks to a newly developed method, the researchers have been able to achieve a pressure that is twice as high as at the earth's centre and 7.7 million times higher than at the earth's surface. With great precision they have then been able to measure both temperature and relative positions of atoms in a small crystalline piece of osmium. Osmium is the metal with the highest density and is almost as incompressible as diamond.